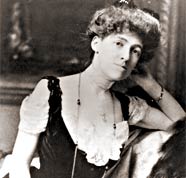 Edith Wharton (1862-1937) was born into a tightly controlled society known as "Old New York" at a time when women were discouraged from achieving anything beyond a proper marriage.
Wharton broke through these structures to become one of America's greatest writers. Author of The Age of Innocence, Ethan Frome, and The House of Mirth, she wrote over 40 books in 40 years, including authoritative works on architecture, gardens, interior design, and travel. Essentially self-educated, she was the first woman awarded the Pulitzer Prize for Fiction, an honorary Doctorate of Letters from Yale University, full membership in the American Academy of Arts and Letters.
Edith Wharton designed and built her "first real home," The Mount, in 1902. The Mount was Wharton's design laboratory where she implemented the principles articulated in her first major book, The Decoration of Houses (1897).
Wharton believed that the design of a house should be treated architecturally and should honor the principles of proportion, harmony, simplicity, and suitability.
She viewed proportion as the "good breeding of architecture" and symmetry as the "sanity of decoration." She saw house decoration as "a branch of architecture" and the decorator's role as "not to explain illusions, but to produce them."
She thought gardens, too, should be architectural compositions.
She wrote in Italian Villas and Their Gardens that gardens should be divided into rooms and planned in concert with the house and the natural landscape.