Listen to the interview over on their website, or anywhere else you get your podcasts!

During his interview, Cervini mentions several books relevant to the conversation surrounding his own book. Find the complete book list below.

About The Deviant's War:

From a young Harvard- and Cambridge-trained historian, the secret history of the fight for gay rights that began a generation before Stonewall.

In 1957, Frank Kameny, a rising astronomer working for the U.S. Defense Department in Hawaii, received a summons to report immediately to Washington, D.C. The Pentagon had reason to believe he was a homosexual, and after a series of humiliating interviews, Kameny, like countless gay men and women before him, was promptly dismissed from his government job. Unlike many others, though, Kameny fought back.

Based on firsthand accounts, recently declassified FBI records, and forty thousand personal documents, Eric Cervini's The Deviant's War unfolds over the course of the 1960s, as the Mattachine Society of Washington, the group Kameny founded, became the first organization to protest the systematic persecution of gay federal employees. It traces the forgotten ties that bound gay rights to the Black Freedom Movement, the New Left, lesbian activism, and trans resistance. Above all, it is a story of America (and Washington) at a cultural and sexual crossroads; of shocking, byzantine public battles with Congress; of FBI informants; murder; betrayal; sex; love; and ultimately victory. 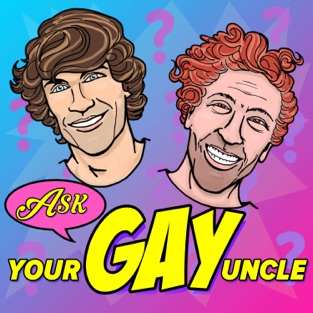 Advice, antics, tender moments, and tough love. Join gay uncle Ben Palacios and his gay uncle, Tom Truss, in their hit new podcast about relationships and queer culture. Ben Palacios has acted and produced around the world from Sydney Opera House to Disney’s FROZEN Live. Tom Truss has danced, choreographed, and directed internationally from the Lincoln Center to Tokyo’s Setegaya Public Theatre. Now the uncle-and-nephew duo team up on a mission to spread love, self-acceptance, and gay-uncle-magic across the land!

The Deviant's War: The Homosexual vs. the United States of America (Hardcover)

I Must Resist: Bayard Rustin's Life in Letters (Paperback)