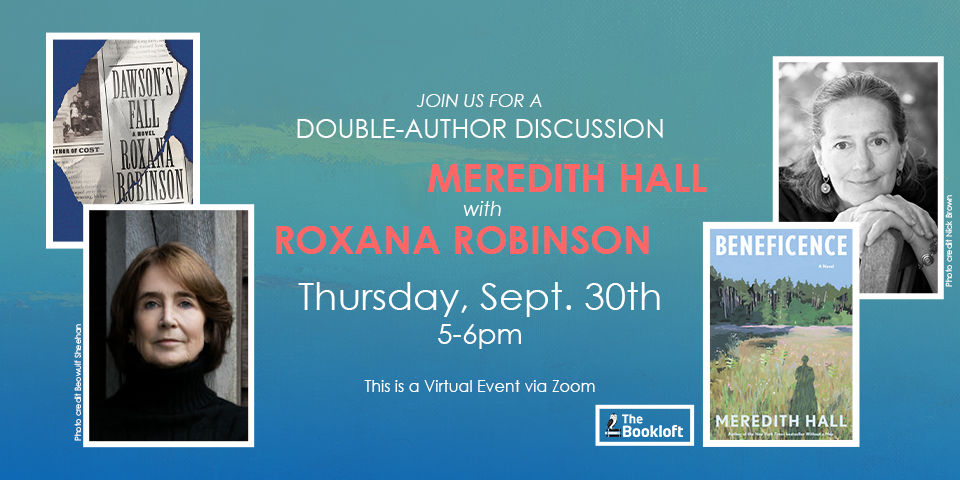 We've got a treat! Join us for a Zoom conversation between 2 authors: Meredith Hall (BENEFICENCE) and Roxana Robinson on Thursday, Sept. 30th, from 5:00pm to 6:00pm.

This is a FREE virtual event, to be held via Zoom.

Meredith Hall's memoir Without a Map was instantly recognized as a classic of the genre and became a New York Times bestseller. It was named a best book of the year by Kirkus and BookSense, and was an Elle magazine Reader’s Pick of the Year. Hall was a recipient of the 2004 Gift of Freedom Award from A Room of Her Own Foundation. Her work has appeared in Five Points, The Gettysburg Review, The Kenyon Review, The Southern Review, The New York Times, and many other publications. Hall divides her time between Maine and California.

Roxana Robinson is the author of ten books - six novels, three collections of short stories, and the biography of Georgia O’Keeffe. Four of these were chosen as New York Times Notable Books , two as New York Times Editors’ Choices. Her fiction has appeared in The New Yorker, The Atlantic, Harper’s, Best American Short Stories, Tin House and elsewhere. Her work has been widely anthologized and broadcast on NPR. Her books have been published in England, France, Germany, Holland and Spain. She is the recipient of many awards, the most recent the Barnes & Noble “Writers for Writers” Award, from Poets & Writers.

About Beneficence by Meredith Hall:

After a sudden and terrible loss, how does a loving family find their way back to the goodness and peace they once shared? Reviewers and readers have called this literary historical novel "hauntingly beautiful," "a masterpiece of compassion," "a page-turner and an artistic triumph."

Written by a masterful storyteller, this is a book that illuminates the journey we make through grief to healing.

In the midst of a nearly perfect life, Doris Senter is thankful but wary. "We can't ever know what will come," she says. When an unimaginable tragedy turns the family of five into a family of four, everything the Senters held faith in is shattered. The family is consumed by sorrow and guilt. Slowly, the surviving family members find their way to forgiveness--of themselves and of each other.