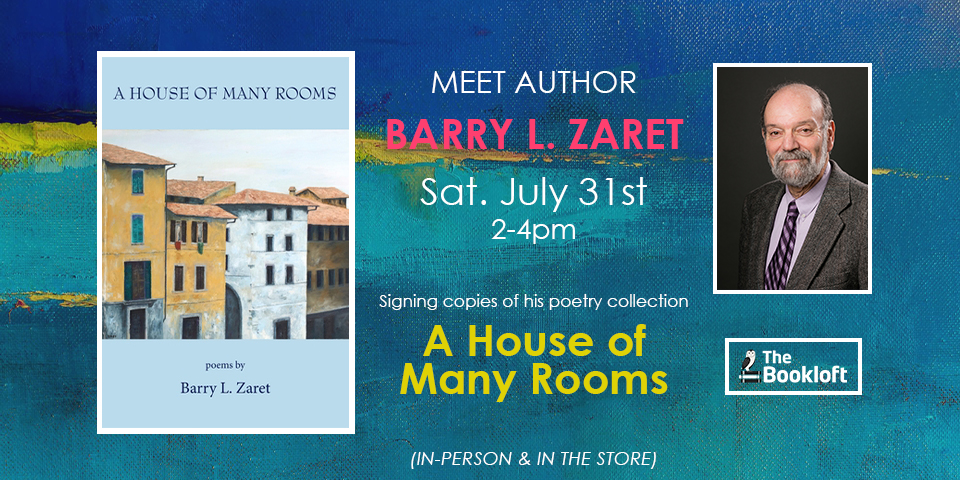 Meet poet Barry L. Zaret on Sat. July 31, from 2-4pm, here at The Bookloft while he signs copies of his newest poetry collection “A House of Many Rooms.”

Dr. Zaret is also an accomplished painter and will also bring something to display in the store.

“A House of Many Rooms” is the third published poetry collection of Dr. Barry L. Zaret. The first, “Journeys”, was published in 2012, the second “When You Can’t do Any More”, in 2017. His poems have appeared in “Caduceus”, “Pharos”, “Long River Run”,” Journal of Nuclear Cardiology”, and the “Otis Observer”. Several of his poems have been set to music and performed in concert. In his former life, Dr. Zaret was a cardiologist and the Robert W. Berliner Professor of Medicine at Yale University School of Medicine. For 27 years he served as Chief of Cardiology at Yale and at Yale-New Haven Medical Center. He is currently Robert W. Berliner Professor Emeritus of Medicine. He is internationally recognized for his pioneer research in the development of nuclear cardiology, and has written or edited five medical texts, one of which is in its fourth edition, as well as several hundred scientific papers and book chapters. He was the founding Editor-in-Chief of the “Journal of Nuclear Cardiology”. He has received many awards for his scientific work and is a member of several honorific societies. Dr. Zaret is also an accomplished painter whose oils are part of numerous private collections. He has exhibited in New Haven and Hartford, Connecticut as well as in the Berkshires. He and his wife Renee live in Woodbridge, Connecticut and East Otis, Massachusetts.

See More About the Book Below

A House of Many Rooms (Paperback)