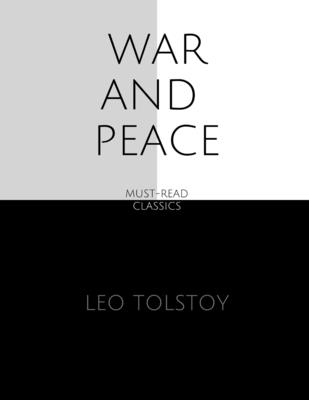 By Leo Tolstoy
PRINT-ON-DEMAND. Email or call for price
OUT OF PRINT

Unabridged & Uncensored Original 1869 Edition.] War and Peace broadly focuses on Napoleon's invasion of Russia in 1812 and follows three of the most well-known characters in literature: Pierre Bezukhov, the illegitimate son of a count who is fighting for his inheritance and yearning for spiritual fulfillment; Prince Andrei Bolkonsky, who leaves his family behind to fight in the war against Napoleon; and Natasha Rostov, the beautiful young daughter of a nobleman who intrigues both men. As Napoleon's army invades, Tolstoy brilliantly follows characters from diverse backgrounds-peasants and nobility, civilians and soldiers-as they struggle with the problems unique to their era, their history, and their culture. And as the novel progresses, these characters transcend their specificity, becoming some of the most moving-and human-figures in world literature.