The Secret Perfume of Birds: Uncovering the Science of Avian Scent (MP3 CD) 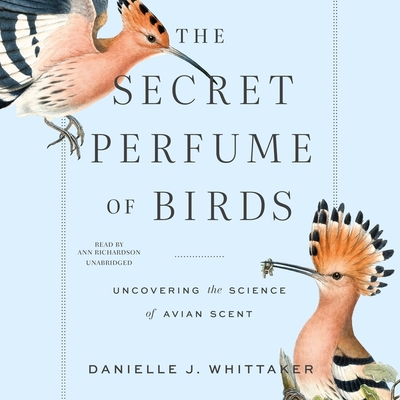 By Danielle J. Whittaker, Ann Richardson (Read by)
$31.95
UNAVAILABLE-Possible Reasons: Backordered, Out-of-Stock, or Out-of-Print (But email us to search for a copy.)

The untold story of a stunning discovery: not only can birds smell, but their scents may be the secret to understanding their world.

The puzzling lack of evidence for the peculiar but widespread belief that birds have no sense of smell irked evolutionary biologist Danielle Whittaker. Exploring the science behind the myth led her on an unexpected quest investigating mysteries from how juncos win a fight to why cowbirds smell like cookies. In The Secret Perfume of Birds―part science, part intellectual history, and part memoir―Whittaker blends humor, clear writing, and a compelling narrative to describe how scent is important not just for birds but for all animals, including humans.

Whittaker engagingly describes how emerging research has uncovered bird's ability to produce complex chemical signals that influence their behavior, including where they build nests, when they pick a fight, and why they fly away. Mate choice, or sexual selection―a still enigmatic aspect of many animal's lives―appears to be particularly influenced by smell. Whittaker's pioneering studies suggest that bird's sexy--and scary--signals are produced by symbiotic bacteria that manufacture scents in the oil that birds stroke on their feathers when preening. From tangerine-scented auklets to her beloved juncos, redolent of moss, birds from across the world feature in Whittaker's stories, but she also examines the smelly chemicals of all kinds of creatures, from iguanas and bees to monkeys and humans.

Listeners will enjoy a rare opportunity to witness the twisting roads scientific research can take, especially the challenging, hilarious, and occasionally dangerous realities of ornithology in the wild. The Secret Perfume of Birds will interest anyone looking to learn more about birds, about how animals and humans use our senses, and about why it can sometimes take a rebel scientist to change what we think we know for sure about the world―and ourselves.