My Kingdom for a Horse: The War of the Roses (Very #5) (Compact Disc) 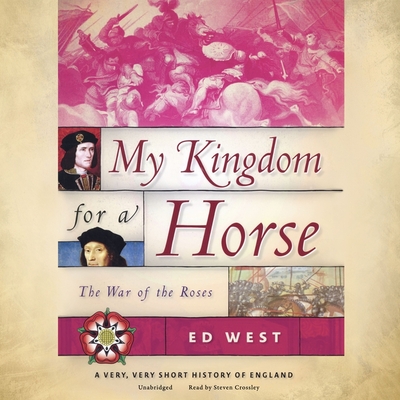 By Ed West, Steven Crossley (Read by)
$36.95
UNAVAILABLE-Possible Reasons: Backordered, Out-of-Stock, or Out-of-Print (But email us to search for a copy.)

This is book number 5 in the Very series.

From William Shakespeare's series of history dramas, to Sir Walter Scott, and George R. R. Martin's A Song of Ice and Fire--not to mention the smash-hit TV show Game of Thrones--the British civil war of 1455 to 1485 has inspired writers for centuries.

Ed West's My Kingdom for a Horse illuminates the bloody war fought for thirty long years between the descendants of King Edward III in a battle for the throne. Named after the emblems used by the two leading families, the Houses of York and Lancaster, the title of the conflict gives it a romantic feel that probably wasn't as apparent to those on the battlefield having swords shoved into their eyes. And, for all the lovely heraldry and glamorous costumes of the era, the war saw the complete breakdown of the medieval code of chivalry in which prisoners were spared, which makes it even better drama. In 1460-61 alone, twelve noblemen were killed in the field and six were beheaded off it, removing a third of the English peerage.

Written in the spirit of a black comedy, My Kingdom for a Horse is an ideal introduction for anyone interested in one of history's most insane wars. Featuring some of history's most infamous figures--including the insane King Henry VI, whose madness triggered the breakdown, and the wicked Richard III, who murdered his young nephews to take the throne--this fifth entry in West's A Very, Very Short History of England series is a must for fans of British history.