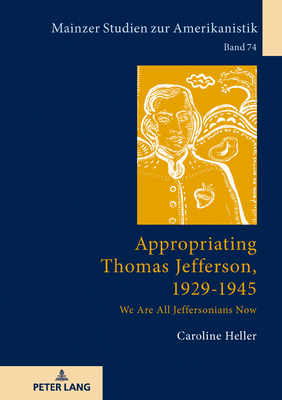 This is book number 74 in the Mainzer Studien Zur Amerikanistik series.

This study counters the view that Franklin D. Roosevelt hegemonically exalted Thomas Jefferson to iconic dominance during the Great Depression. It analyzes the diversity of those who appropriated Jefferson to find answers to the socio-economic crisis and modern industrial capitalism. This discourse analysis, spanning the ideological spectrum between 1929-1945, reveals that the creation of the Jefferson icon--in various forms of representation--generated counterhegemonic varieties of Jefferson because the appropriators grafted their values onto the historical figure which led to its transformation. These competing versions of Jefferson expressed a reformed sense of national values not only through commonalities but through the flexibility of interpretative and representational differences.

Caroline Heller received her MA in British Studies, Book Studies and American Studies from Johannes Gutenberg-University (JGU) Mainz and completed a year abroad at Middlebury College, Vermont. She was a stipend recipient of Cusanuswerk and earned her doctorate degree in American Studies from JGU in 2018. Since 2015, she has held various teaching positions at the University of Mississippi.