Spying on the South: An Odyssey Across the American Divide (CD-Audio) 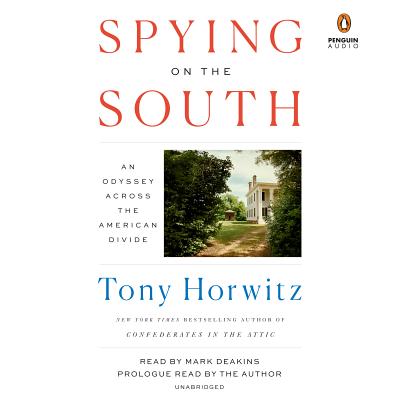 By Tony Horwitz, Mark Deakins (Read by), Tony Horwitz (Read by)
$45.00
OUT-OF-PRINT & UNAVAILABLE! (But email us to search for a used copy.)

With Spying on the South, the best-selling author of Confederates in the Attic returns to the South and the Civil War era for an epic adventure on the trail of America's greatest landscape architect. In the 1850s, the young Frederick Law Olmsted was adrift, a restless farmer and dreamer in search of a mission. He found it during an extraordinary journey, as an undercover correspondent in the South for the up-and-coming New York Times.

For the Connecticut Yankee, pen name "Yeoman," the South was alien, often hostile territory. Yet Olmsted traveled for 14 months, by horseback, steamboat, and stagecoach, seeking dialogue and common ground. His vivid dispatches about the lives and beliefs of Southerners were revelatory for readers of his day, and Yeoman's remarkable trek also reshaped the American landscape, as Olmsted sought to reform his own society by creating democratic spaces for the uplift of all. The result: Central Park and Olmsted's career as America's first and foremost landscape architect.

Tony Horwitz rediscovers Yeoman Olmsted amidst the discord and polarization of our own time. Is America still one country? In search of answers, and his own adventures, Horwitz follows Olmsted's tracks and often his mode of transport (including muleback): through Appalachia, down the Mississippi River, into bayou Louisiana, and across Texas to the contested Mexican borderland. Venturing far off beaten paths, Horwitz uncovers bracing vestiges and strange new mutations of the Cotton Kingdom. Horwitz's intrepid and often hilarious journey through an outsized American landscape is a masterpiece in the tradition of Great Plains, Bad Land, and the author's own classic, Confederates in the Attic.

Tony Horwitz was a native of Washington, D.C., and a graduate of Brown University and Columbia University's Graduate School of Journalism. As a newspaper reporter he spent a decade overseas, mainly covering wars and conflict in the Middle East, Africa, and the Balkans for The Wall Street Journal. Returning to the U.S., he won the Pulitzer Prize for national reporting and wrote for The New Yorker before becoming a full-time author. His books include the national and New York Times bestsellers, Confederates in the Attic, Blue Latitudes, Baghdad Without a Map, and A Voyage Long and Strange. Midnight Rising was named a New York Times Notable Book in 2011 and one of the year's ten best books by Library Journal. Tony was also a fellow at the Radcliffe Institute for Advanced Study at Harvard University and the president of the Society of American Historians. He died in May 2019, and is survived by his wife Geraldine Brooks and their two sons, Nathaniel and Bizu.

“Timely . . . A valuable work that combines biography, history and travelogue. . . . Horwitz is a smooth writer and an even better reporter (hardly surprising, given that he won a Pulitzer Prize for reporting at The Wall Street Journal), and he recounts his travels with insight interspersed with humor, as well as with an intermittent raising of the eyebrows at numerous oddities and occasional evils.” —The New York Times Book Review

“In Horwitz’s writing, past and present collide and march together on almost every page, prying our minds open with the absurdity, hilarity and humanity we encounter. Olmsted spent nine months traveling 4,000 miles and then wrote hundreds of pages about it; Horwitz spent two years revisiting his paths, his ideas and his psyche, capturing the story in 414 pages of sparkling prose.” —David Blight, The Washington Post

“A compelling report on the state of our present disunion.” —Wall Street Journal

“I've been waiting for Tony Horwitz to write another big on-the-road book that crisscrosses the American cultural divide . . . Spying on the South is every bit as enlightening and alive with detail, absurdity and colorful characters as Confederates in the Attic was.” —NPR

"He was the rare historian—the only historian I can think of—equally at home in the archive and in an interview, a dedicated scholar, a devoted journalist." —Jill Lepore, The New Yorker

“Horwitz’s excellence as a writer and reporter unearths forgotten chapters of history while making fascinating present-day discoveries.” —The Atlanta Journal-Constitution

“Horwitz is an amiable narrator who marries a journalist’s knack for scene-setting and chatting folks up with the ability to tell a good historical tale.” —BookPage

“A tour is only as good as its guide, and Horwitz is a seasoned one—inquisitive, open-minded, and opting for observation over judgment, whether at a dive bar, monster truck rally, the Creation Museum, or a historical plantation. The book will appeal to fans of travelogue, Civil War–era history, and current events by way of Southern sensibilities.” —Booklist

“Horwitz brings humor, curiosity, and care to capturing the voices of the larger-than-life characters he encounters. A huge canvas of intricate details, this thoughtful and observant work delicately navigates the long shadow of America’s history.” —Publishers Weekly, starred review

“With the keen eye and deft pen that he's long brought to telling the odd and wonderful and fascinating story of America, Tony Horwitz has returned to familiar territory—the South—to give us a unique piece of reportage from a region that tells us a whole lot more about the country than the country sometimes wants to admit. Like his classic Confederates in the Attic, this book will be read, remembered, and treasured.” —Jon Meacham, Pulitzer-Prize-winning historian and author of The Soul of America

“Tony Horwitz’s reporting is fearless and persistent and inspired—and it produces views of America like no one else’s. Spying on the South kept me turning the pages to see what frightening and funny revelation was coming next. An important book for our almost unprecedented moment in history.” —Ian Frazier, author of Great Plains and Travels in Siberia

“In the long dark years before the Civil War, Frederick Law Olmsted toured the South by stage, by boat, by train, and by foot, reporting on a nation unraveling. Tony Horwitz does much more than follow in Olmsted’s footsteps in this searching travel narrative: he chronicles an American agony, the pain of division, the anguish of uncertainty. But he finds, too, an enduring American spirit of generosity, and commonweal, and curiosity.” —Jill Lepore, author of These Truths: A History of the United States

“Two journeys, a hundred and sixty years apart, remind us that history doesn’t repeat itself, but it does rhyme. In the midst of our country’s long-overdue reckoning with symbols of white supremacy, Tony Horwitz retraces the steps of America’s greatest landscape architect, Frederick Law Olmsted, whose encounters with slavery forced him to rethink the role of civic spaces in the American experiment. Horwitz brings home a magnificent account of who we have been and what we might still become.” —Henry Louis Gates, Jr., author of Stony the Road

“Having grown up amidst the Emerald Necklace, having lived off the northern fringes of Central Park and later the western edge of its rangier cousin, Prospect, and having read Devil In the White City, I truly did not know there were any more astonishments left in the life of Frederick Law Olmsted. Leave it to the incomparable Tony Horwitz to reveal Olmsted’s secret life as a journalistic super-spy, peering not merely into the burgeoning Confederacy, but, as Horowitz poignantly observes, a cultural divide with which we are still reckoning.” —John Hodgman, author of Vacationland

“In the 1850s, Yankees saw the South as a foreign country and the New York Times sent Frederick Law Olmsted on an undercover mission to interpret it for readers. It was a daring and inspired move, and so is Tony Horwitz’s retracing of Olmsted’s path from the Potomac to the Rio Grande. Spoiler alert, things don’t always go well for our dauntless guide, but they sure do for the reader. This is one of the smartest, funniest, and most illuminating books about the South and Texas, and about our own divided times, I’ve had the pleasure to read.” —Bryan Burrough, author of Days of Rage, The Big Rich and Public Enemies