A Woman of Influence: The Spectacular Rise of Alice Spencer in Tudor England (Hardcover) 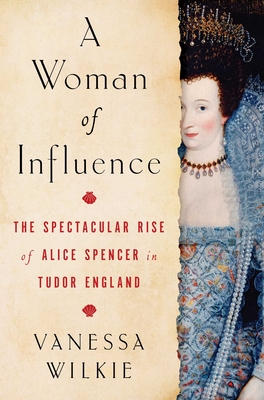 This extraordinary true story transports us to Tudor and Stuart England as Alice Spencer, the daughter of an upstart sheep farmer, becomes one of the most powerful women in the country and establishes a powerful dynasty that endures to this day. Perfect for fans of The Duchess Countess and Georgiana.

Alice Spencer was born in 1560 to a family on the rise. Her grandfather had amassed a sizeable estate of fertile grazing land and made a small fortune in sheep farming, allowing him to purchase a simple but distinguished manor house called Althorp.

With her sizable dowry, Alice married the heir to one of the most powerful aristocratic families in the country, eventually becoming the Countess of Derby. Though she enjoyed modest renown, it wasn’t until her husband’s sudden death (after he turned in a group of Catholics for plotting against Queen Elizabeth I) that Alice and her family’s future changed forever.

Faced with a lawsuit from her brother-in-law over her late husband’s fortune, Alice raised eyebrows by marrying England’s most powerful lawyer. Together, they were victorious, and Alice focused her attentions on securing appropriate husbands for her daughters, increasing her land ownings, and securing a bright future for her grandchildren and the entire Spencer family. But they would not completely escape scandals, and as the matriarch, Alice had to face an infamous trial that threatened everything she had worked so hard for.

Now, the full story of the remarkable Alice Spencer Stanley Egerton is revealed in this comprehensive and colorful biography. A woman both ahead of and part of her time, Alice’s ruthless challenging of the status quo has inspired future generations of Spencers and will change the way you view Tudor women.

Vanessa Wilkie is the William A. Moffett Curator of Medieval Manuscripts and British History at The Huntington Library, Art Museum, and Botanical Gardens. She has a PhD in British history and gender history and an MA in public history from the University of California, Riverside. She lives in Los Angeles. A Woman of Influence is her first book.