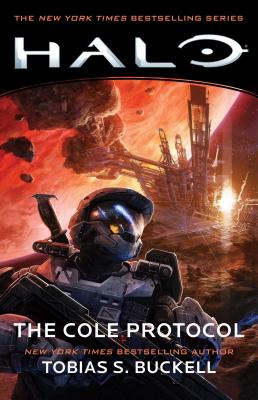 This is book number 6 in the Halo series.

The New York Times bestseller—part of the expanded universe based on the award-winning video game series Halo!

2535. It is the first, desperate days of the Human-Covenant War, and the United Nations Space Command has enacted “the Cole Protocol” to safeguard Earth and its inner colonies from discovery by its merciless alien foe. Many are called upon to rid the galaxy of lingering navigation data that could potentially reveal the location of Earth and ensure the destruction of humanity. Among those tasked with eliminating any trace of such dangerous information is Navy Lieutenant Jacob Keyes—now saddled with a top-secret mission by the Office of Naval Intelligence…one that will take him to a corner of the galaxy where nothing is as it seems.

Out beyond the Outer Colonies lies the planet Hesiod, a gas giant surrounded by a vast asteroid belt. As the Covenant continues to glass the human-occupied planets near Hesiod, many of the survivors, aided by a stronghold of human insurrectionists, are fleeing to the asteroids for refuge. They have transformed the tumbling satellites into a tenuous yet ingenious settlement known as the Rubble—and have come face-to-face with a Covenant settlement of Kig-Yar…yet somehow survived. News of this unlikely treaty has spread to the warring factions. Luckily for the UNSC, this uneasy alliance is in the path of the Spartan Gray Team, a three-person renegade squad whose simple task is to wreak havoc from behind enemy lines in any way they see fit. But the Prophets have also sent their very best—an ambitious and ruthless Elite whose quest for nobility and rank is matched only by his brutality…

Called “violent, poetic, and compulsively readable” by Maclean’s, science fiction author Tobias S. Buckell is a New York Times bestselling writer born in the Caribbean. He grew up in Grenada and spent time in the British and US Virgin Islands, and these places influence much of his work. His Xenowealth series begins with Crystal Rain. Along with other stand-alone novels and his more than fifty stories, Tobias’s works have been translated into eighteen different languages. He has been nominated for such awards as the Hugo, Nebula, Prometheus, and John W. Campbell Award for Best New Science Fiction Author. His latest original novels are Hurricane Fever, a follow-up to the successful Arctic Rising, which NPR says will “give you the shivers,” and the acclaimed Halo: Envoy. He currently lives in Ohio, with his wife, twin daughters, and a pair of dogs. He can be found online at TobiasBuckell.com.