Franciscans and the Protestant Revolution in England (Hardcover) 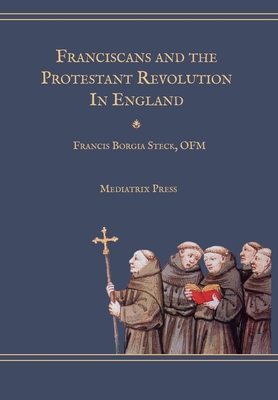 In 1509, a young Henry VIII ascends the English throne. His accession is seen by many as a golden age, and the situation of the life of the Church poised for a spiritual renaissance. Sadly, it was not to be. Henry would break from Rome, establishing the legacy of English Protestantism which would sweep away the old faith in its wake.

The sons of St. Francis, however, were not idle nor lax at this pivotal point in history. Rather, they offered up a heroic witness to the Catholic faith in what was once Mary's dowry, and from laity to priests would shed their blood for timeless Catholic truth. This is the story of their witness in the first century of Protestantism in England, where the friars tenaciously hung on until the dissolution of the province after 1688.

Fr. Steck, compiles numerous sources together to weave the fabric that is the history of the Franciscan martyrs of England. He begins with the foundation of the order in England, its auspicious position in the early years of Henry VIII, and the coming of the storm under the later years of Henry, through the lives of Thomas More and Katherine of Aragon, both of whom were Franciscan tertiaries. From there he traces the martyrs under Elizabeth and under the Stuarts, until the period of the "Glorious Revolution" in 1688.

This work has been completely re-typeset in conformity with the original, and is not a facsimile reprint.