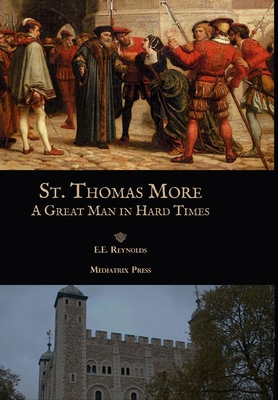 St. Thomas More, by E.E. Reynolds, is a complete life of the saint based on primary source accounts, state papers and contemporary registers. Reynolds leaves no written source uncovered in drawing together for us the man who became one of the most famous men not only in England, but even in Europe, who gave his life for the rights of the Church over the tyranny of the state.

Reynolds traces More's life and environs, as well as More's writings and poetry, to bring out the man and the hour in which he lived. There are lengthy studies of Richard III, Utopia, and The Dialogues which More wrote against heretics. Lastly, he concludes with a penetrating legal analysis of the reasons which brought More to the Tower and to beheading.

Throughout there are many crucial and important direct quotes from letters, speeches and of course, the words of More related by early authorities in court and at his trial. Thereby we see the warm relationship between More and great scholars like Colet and Erasmus, as well as his close relationship with his daughter Margaret (Meg), and his great strides to provide her an education which she took up brilliantly. This makes More come to life as a real person, with wit and joy and above all passion, not the plaster saint of a second nocturne variety. There is a reason why More is one of the few and best known laymen to be canonized and remembered through the ages.

"Thomas More is more important at this moment than at any moment since his death, even perhaps the great moment of his dying; but he is not quite as important as he will be in about a hundred years' time. He may come to be counted the greatest Englishman, or at least the greatest historical character in English history."