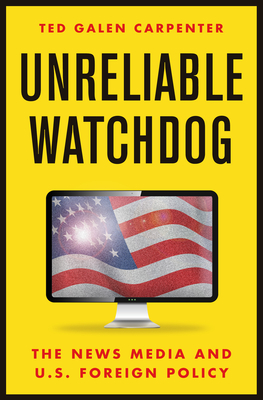 Freedom of press is a cornerstone of our democratic political system. But reporters, pundits, and editors face intense pressure to serve as propagandists rather than journalists in their coverage of U.S. foreign policy. Too many members of the news media seem unable to make that distinction and play their proper role as watchdogs for the American people regarding possible government incompetence or misconduct. Since World War II, America has become a garrison state always prepared for armed conflict and the conflating of journalism and propaganda has grown worse--even in situations that do not involve actual combat for the United States. That behavior increasingly constrains and distorts the public's consideration of Washington's role in the world.In Unreliable Watchdog, Ted Galen Carpenter focuses on the nature and extent of the American news media's willingness to accept official accounts and policy justifications, too often throwing skepticism aside. He takes readers through an examination of the media's performance with respect to the Vietnam War, the Persian Gulf War, the conflicts in the Balkans, the prelude to the Iraq War, the civil wars in Libya and Syria, and Washington's post-Cold War relations with both Russia and China. The analysis explores why most journalists--as well as social media platforms--seem willing to collaborate with government officials in pushing an activist foreign policy, even when tactics or results have been questionable, disappointing, or even disastrous.Unreliable Watchdog jump-starts a badly needed conversation about how the press must improve its coverage of foreign policy and national security issues if it is to serve its proper role for the American people.

Ted Galen Carpenter is senior fellow for defense and foreign policy studies at the Cato Institute. He is the author of twelve books and more than 800 articles and studies on international affairs. His previous books include Gullible Superpower: U.S. Support for Bogus Foreign Democratic Movement;Perilous Partners: The Benefits and Pitfalls of America's Alliances with Authoritarian Regimes; The Fire Next Door: Mexico's Drug Violence and the Danger to America; and Smart Power: Toward a Prudent Foreign Policy for America. He is a frequent guest expert on radio and television programs and is a contributing editor to both the National Interest and American Conservative.