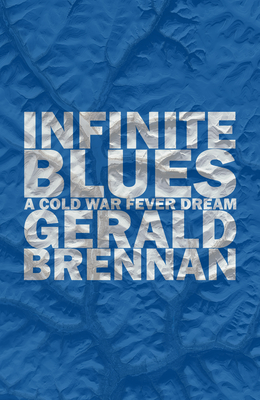 This is book number 4 in the Altered Space series.

June, 1968. An air force astronaut flies to an orbiting observation platform for a forty-day stint spying on the Soviet Union from space--and discovers a plot that will determine the fate of the world.
The fourth book in the Altered Space series, Infinite Blues imagines a militarized Space Race in a Cold War that never was, with America trying to find its way back to normalcy after the MacArthur presidency, and warily watching as Beria's Soviet Union builds the ballistic missiles that threaten to destroy it on a half-hour's notice. A thoroughly researched thriller full of political paranoia and imaginative intrigue, it's also a look at today's America through the lens of an alternate past, as well as a literary examination of observation and participation, individualism and collectivism, the ideas and attitudes that hold our country together--and the ones that might send it careening towards catastrophe.
The titles in the Altered Space series are wholly separate narratives, but all deal with the mysteries of space and time, progress and circularity. Each one is an ensō of words in which orbits of spacecraft, moons, planets, and people allow us fresh perspectives on the cycles of our own lives.

Mr. Brennan earned a B.S. in European History from the United States Military Academy at West Point and an M.S. in Journalism from Columbia University in New York. He's the author of Resistance, and a series of space books including Zero Phase, Public Loneliness, Island of Clouds, Infinite Blues, and the forthcoming Alone on the Moon. He's done extensive original research for his space titles, including interviews with former astronauts (some of whom have walked on the moon) and technical consultation with retired NASA engineers, but budgetary constraints have prevented on-site outer space research. (So far.) His writing has appeared in the Chicago Tribune, Hypertext Magazine, The Good Men Project, and Innerview Magazine. He's the founder of Tortoise Books; he's also been a frequent contributor and co-editor at Back to Print and The Deadline. He resides in Chicago. Follow him on Twitter @jerry_brennan