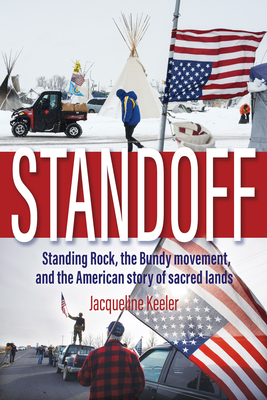 A powerful, illuminating book.
--LOUISE ERDRICH, author of The Night Watchman Native young people and elders pray in sweat lodges at the Oc ti Sak win camp, the North Dakota landscape outside blanketed in snow. In Oregon, white men and women in army surplus and western gear, some draped in the American flag, gather in the buildings of the Malheur Wildlife Refuge. The world witnessed two standoffs in 2016: the Standing Rock Sioux Tribe's protest against an oil pipeline in North Dakota and the armed takeover of Oregon's Malheur Wildlife Refuge led by the Bundy family. These events unfolded in vastly different ways, from media coverage to the reactions of law enforcement. In Standoff, Jacqueline Keeler examines these episodes as two sides of the same story that created America and its deep-rooted cultural conflicts.

JACQUELINE KEELER is a Dine/Ihanktonwan Dakota writer living in Portland, Oregon. She is editor of the anthology Edge of Morning: Native Voices Speak for the Bears Ears and has contributed to many publications including The Nation, Yes! magazine, and Salon.