Feminicide and Global Accumulation: Frontline Struggles to Resist the Violence of Patriarchy and Capitalism (Paperback) 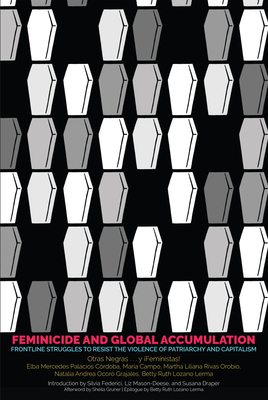 Feminicide and Global Accumulation brings us to the frontlines of an international movement of Black, Indigenous, popular, and mestiza women's organizations fighting against violence--interpersonal, state sanctioned, and economic--that is both endemic to the global economy and the contemporary devalued status of racialized women, trans, and gender non-conforming communities in the Global South.

These struggles against racism, capitalism, and patriarchy show how crucially linked the land, water, and other resource extraction projects that criss-cross the planet are to devaluing labor and nature and how central Black and Indigeneous women and trans leadership is to its resistance.

The book is based on the first ever International Forum on Feminicide among ethnicized and racialized groups--which brought together activists and researchers from Colombia, Guatemala, Italy, Brazil, Iran, Guinea Bissau, Bolivia, Canada, the U.S., Ecuador, Spain, Mexico, among other countries in the world to represent different social movements and share concrete stories, memories, experiences and knowledge of their struggles against racism, capitalism and patriarchy.

Feminicide and Global Accumulation reflects, in a collective fabric, the communitarian and enraged struggles of women, trans, and gender non-conforming communities who commit themselves to the transformation of their communities by directly challenging the murder and assassination of women and violence in all its forms.