We Want Freedom: A Life in the Black Panther Party (New Edition) (Paperback) 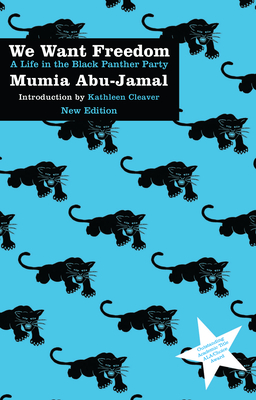 "Writing from the barren confines of his death row cell, Mumia Abu-Jamal provides a remarkable testament about the Black Panther Party. . . .an amazing book that illuminates the truth of what his membership in the Party was about, and reveals the extreme price extracted from him for having learned, and for now telling the truth."
--Kathleen Cleaver, from the Introduction

Mumia Abu Jamal, America's most famous political prisoner, is internationally known for his radio broadcasts and books emerging "Live from Death Row." In his youth Mumia Abu-Jamal helped found the Philadelphia branch of the Black Panther Party, wrote for the national newspaper, and began his life-long work of exposing the violence of the state as it manifests in entrenched poverty, endemic racism, and unending police brutality. In We Want Freedom, Mumia combines his memories of day-to-day life in the Party with analysis of the history of Black liberation struggles. The result is a vivid and compelling picture of the Black Panther Party and its legacy.

Applying his poetic voice and unsparing critical gaze, Mumia examines one of the most revolutionary and most misrepresented groups in the US. As the calls that Black Lives Matter continue to grow louder, Mumia connects the historic dots in this revised/updated edition, observing that the Panthers had legal observers to monitor the police and demanded the "immediate end to police brutality and the murder of Black people." By focusing on the men and women who were the Party, as much as on the leadership; by locating the Black Panthers in a struggle centuries old--and in the personal memories of a young man--Mumia Abu-Jamal helps us to understand freedom.

Mumia Abu-Jamal is an award-winning journalist and former Black Panther Party member, whose previous books include Live From Death Row, Death Blossoms, All Things Censored, Faith of our Fathers, Jailhouse Lawyers, and Writing on the Wall. He has been living in Pennsylvania prisons since 1982, the majority of those years spent on death row. Kathleen Cleaver, an activist scholar, has taught at Emory University School of Law and Yale University's African American Studies Department. She quit college in 1966 to join the Civil Rights movement, then served as the Black Panther Party's Communications Secretary from 1967-1971. Cleaver coedited the essay collection Liberation, Imagination and the Black Panther Party, and is author of the forthcoming Memories of Love and War.