Last Boat to Yokohama: The Life and Legacy of Beate Sirota Gordon (Paperback) 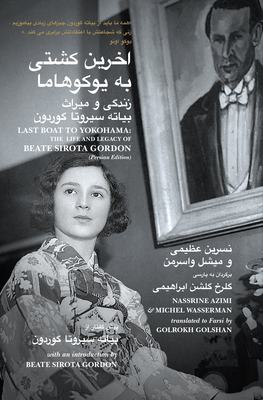 By Nassrine Azimi, Michel Wasserman, Golrokh Golshan (Translator)
$16.00
UNAVAILABLE-Possible Reasons: Backordered, Out-of-Stock, or Out-of-Print (But email us to search for a copy.)

Last Boat to Yokohama tells a story of both tragedy and grandeur in the 20th century. It recounts the life and work of Beate Sirota Gordon: the influence of her father, Leo Sirota, one of the greatest pianists of his generation; her secret work ensuring women's equality while helping to develop the post-WWII Japanese constitution--at the age of 22; her broad influence on hundreds of Western artists such as Robert Wilson, David Byrne and Peter Sellars--who were introduced to leading contemporary Asian music, dance, theater and visual artists through her extraordinary cross-cultural efforts. The book relives Beate's drive, talent, ambition, and influence, with intimate diary excerpts from her mother, an introduction by Beate herself, and an afterword from her daughter, Nicole.
Note: This edition is the Persian translation of the English edition.

Nassrine Azimi has co-founded and now coordinates the Green Legacy Hiroshima (GLH) Initiative, a global campaign to plant seeds and saplings of trees that survived the atomic bombing of Hiroshima worldwide. She established the Hiroshima Office for Asia and the Pacific, United Nations Institute for Training and Research (UNITAR), in 2003. Azimi has written and published extensively on training, UN peacekeeping, post-conflict reconstruction, and environmental governance. Her op-ed pieces have appeared regularly in the international press. She lives in Hiroshima, Japan. Michel Wasserman is the former director of the Kyoto French Cultural Institute and of a French "artist in residence" program in Kyoto, the Villa Kujoyama. He is currently professor at the College of International Relations, Ritsumeikan -University. A Paris III doctor in oriental studies, Michel Wasserman has worked and written extensively on Japanese traditional theatre, especially Kabuki, and has also published various books on the reception of western music in Japan. He lives in Kyoto, Japan.