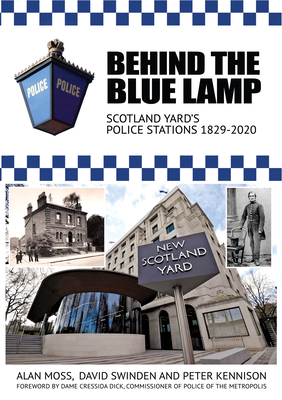 By Alan Moss, David Swinden, Peter Kennison
$60.00
UNAVAILABLE-Possible Reasons: Backordered, Out-of-Stock, or Out-of-Print (But email us to search for a copy.)

Ever since its inception in 1829 the Metropolitan Police Service has seen change on a daily basis, not least in recent years with budget cuts and the closure of police stations. Recording the stories of these buildings, BEHIND THE BLUE LAMP reveals the histories of more than 400 police stations operated by the Metropolitan Police over the course of its existence, from pre-Peel Parish watch houses to the New Scotland Yard headquarters on Victoria Embankment. The lives of the officers who served and sometimes lived in these police stations are related, charting a developing social history across the capital of almost two centuries. An account of the evolution of the Metropolitan Police District is also given, including histories of the various Divisions, and details of the developing uniforms, equipment and badges of rank over the course of more that 190 years are recorded.

ALAN MOSS, a Classics graduate from Durham University, served as a Metropolitan Police officer for 30 years, retiring as a Chief Superintendent in 1997. He has worked abroad in police training and consultancy, was involved in planning for a Metropolitan Police museum at Bow Street, has co-authored a number of books about policing history with Keith Skinner, has made a number of TV appearances about policing history and operates a website about the history of London policing at www.historybytheyard.co.uk. DAVID SWINDEN MSC., DMS., PgDip (History) retired from the Metropolitan Police as a Superintendent in 1994. His 36 years' Police service was spent in north and east London and at New Scotland Yard. He also carried out police consultancy projects in the USA, Uganda and Gibraltar. After retiring from the Police service he became a senior lecturer in Human Resources Management at the University of East London, and was responsible for a number of educational programmes worldwide. PETER KENNISON BA, MA, PhD has been a practitioner and academic for over 35 years. He joined the Metropolitan Police in 1970 and over a career spanning nearly three decades he served on five Police divisions in north and east London, the Police Training School at Hendon, and in the Complaints Investigation Branch (CIB3) at New Scotland Yard. His interests include policing (including its historical context), child protection and community safety. Peter is now fully retired having been a senior lecturer in Criminology at the Universities of Middlesex and Brighton.