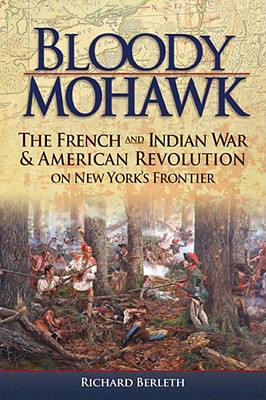 By Richard Berleth
UNAVAILABLE AT THIS TIME (Possible reasons: Backordered, Out-of-Stock Indefinitely, or Print-on-Demand only)
OUT OF PRINT

In this narrative history of the Mohawk River Valley and surrounding region from 1713 to 1794, Professor Richard Berleth charts the passage of the valley from a fast-growing agrarian region streaming with colonial traffic to a war-ravaged wasteland. The valley's diverse cultural mix of Iroquois Indians, Palatine Germans, Scots-Irish, Dutch, English, and Highland Scots played as much of a role as its unique geography in the cataclysmic events of the 1700sthe French and Indian Wars and the battles of the American Revolution. Patriots eventually wrenched the valley from British interests and the Iroquois nations, but at fearsome cost. When the fighting was over, the valley lay in ruins and as much as two-thirds of its population lay dead or had been displaced. But by not holding this vital inland waterwaythe gateway to the West, "the river between the mountains"America might have lost the Revolution, as well as much or all of the then poorly defined province of New York.