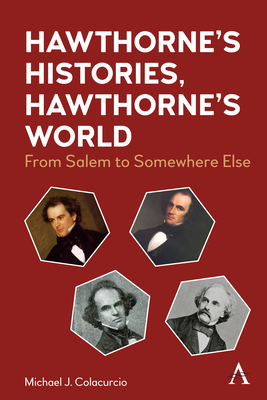 A collection of essays rather than a single, continuously argued monograph, Hawthorne's Literary History collects together the essays Professor Colacurcio has written on Hawthorne since the publication of his ground-breaking Province of Piety, elaborating and refining his analyses of how Hawthorne's most memorable early tales "do history," but proceeding then to explore the later productions of that author's distinguished career. The result, in Colacurcio's patient analysis, is something like Hawthorne's history of his own times. To be sure, The Scarlet Letter returns to the rich theme we know as "the matter of the Puritans," but rides up from a moment, and clearly implies, the vibrant but troubled women's movement; and, imagining the world Hester Prynne as good as predicted, The Blithedale Romance deepens the sensitive but cautious inquiry. Contemporaneous too is the subject of The House of the Seven Gables which, stopping just short of discovering that property is theft, dares to inquire into the murky sources of aristocratic wealth and privilege in his present New England. From the moment between the early tales and the three American romances, the tales and sketches written at the Old Manse in Concord reveal Hawthorne's fascinated and troubled response to that swirl of contemporary reform movements which historians know as "Freedom's Ferment"; several encounter Emerson explicitly, and even more question the life-implications of "idealism as it appears in 1842," as Emerson had defined his Transcendentalism. From the so-called "Last Phase" of Hawthorne's career, Colacurcio presents, along with some remarks "Chiefly About War Matters" (1862) and, more briefly still, the unfinished romances, a major reading of the work Hawthorne called Our Old Home (1863); growing out of the Notebooks the author kept while serving as American Consul to Liverpool in the mid-1850s, this now nostalgic, now fierce mix of excursion and critique reveals a great deal about Hawthorne's social intelligence, and about his biases. Finally, Colacurcio offers a patient but somewhat resistant reading of The Marble Faun, a major effort to identify the "puritanic" element in the developing American identity but revealing, at the same time, an unsteady Narrator's increasing hesitance about the epistemology of the "Romance." Literary genius beginning to doubt its gift.

Distinguished Professor of English at UCLA and member of the American Academy of Arts and Sciences, Michael J. Colacurcio is the author of, inter alia, The Province of Piety (1984), Godly Letters (2007), Emerson and Other Minds (2020) and, most recently, Doctrine and Difference: Readings in Classic American Literature (forthcoming).