Heralds of the Siege (The Horus Heresy #52) (Paperback) 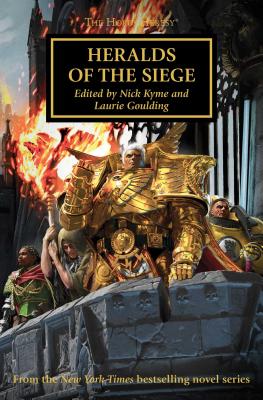 This is book number 52 in the The Horus Heresy series.

? Book 52 of the much loved and hugely popular Horus Heresy series. An awesome collection of sixteen short stories, including several set just before the Siege of Terra begins…

A galaxy burns and brother turns on brother as the conflict brought about by a beloved son’s betrayal reaches its fateful end. The Warmaster Horus has triumphed. His massive fleet at last nears Terra and the patriarchal Throne of his hated father. Many have fallen to bring this moment about, their tales are the ashes upon which the Heresy was born and prospered. Others have played their own small parts, drops in an ocean of war and blood. None of it matters. Terra looks to the skies as it raises its defences. Armies muster, heroes raise their swords, citizens cower. The war is coming. And nothing can stop it.

This anthology includes sixteen stories set during the Horus Heresy, some of which are in print for the first time or were originally released as audio dramas, by authors Gav Thorpe, Chris Wraight, John French, James Swallow, Guy Haley, Nick Kyme, Rob Sanders and Anthony Reynolds.

Rob Sanders is the author of the Horus Heresy novellas Cybernetica and The Serpent Beneath, the latter of which appeared in the New York Times bestselling anthology The Primarchs. His other Black Library credits include the The Beast Arises novels Predator, Prey and Shadow of Ullanor, the Warhammer 40,000 titles Sons of the Hydra, Skitarius, Tech-Priest, Legion of the Damned, Atlas Infernal and Redemption Corps and the audio drama The Path Forsaken. He has also written the Warhammer Archaon duology, Everchosen and Lord of Chaos, along with many short stories for the Horus Heresy and Warhammer 40,000. He lives in the city of Lincoln, UK.

Guy Haley is the author of the Siege of Terra novel The Lost and the Damned, as well as the Horus Heresy novels Titandeath, Wolfsbane and Pharos, and the Primarchs novels Konrad Curze: The Night Haunter, Corax: Lord of Shadows and Perturabo: The Hammer of Olympia. He has also written many Warhammer 40,000 novels, including Belisarius Cawl: The Great Work, Dark Imperium, Dark Imperium: Plague War, The Devastation of Baal, Dante, Darkness in the Blood, Baneblade and Shadowsword. His enthusiasm for all things greenskin has also led him to pen the eponymous Warhammer novel Skarsnik, as well as the End Times novel The Rise of the Horned Rat. He has also written stories set in the Age of Sigmar, included in War Storm, Ghal Maraz and Call of Archaon. He lives in Yorkshire with his wife and son.