The Muslim Problem: Why We're Wrong About Islam and Why It Matters (Hardcover) 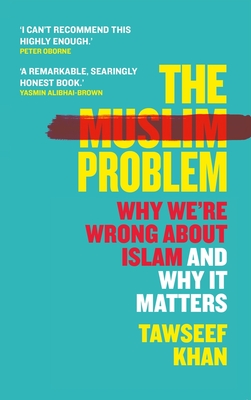 Why are Muslim men portrayed as inherently violent? Does the veil violate women's rights? Is Islam stopping Muslims from integrating? Across western societies, Muslims are more misunderstood than any other minority. But what does it mean to believe in Islam today, to have forged your beliefs and identity in the shadow of 9/11 and the War on Terror? Exploding stereotypes from both inside and outside the faith, The Muslim Problem shows that while we may think we know all about Islam we are often wrong about even the most basic facts. Bold and provocative, The Muslim Problem is both a wake-up call for non-believers and a passionate new framework for Muslims to navigate a world that is often set against them.

Tawseef Khan is a qualified solicitor specializing in immigration and asylum law and a human rights activist with over ten years of experience working on refugee and Muslim issues. In 2016 he obtained a doctoral degree from the University of Liverpool, where his thesis explored the fairness of the British asylum system. He was a recipient of a 2017 Northern Writers Award. He is a Muslim and lives in Manchester.

"A bracing and brilliant book. From women's rights to terrorism, The Muslim Problem takes apart misconceptions and shows what it's really like to be a Muslim today. By placing Islamophobia in a historical context, Khan gives powerful insights into one of the most hotly-contested and topical issues of our times." —Reza Aslan, author, Zealot: The Life and Times of Jesus of Nazareth

"Timely, urgent and eloquent. An honest and well-researched exploration of how biases, stereotypes and prejudices affect identity both from within and outside the Muslim community." —Pragya Agarwal, author, Sway: Unravelling Unconscious Bias

"I can't recommend this sober, level-headed and highly readable book too highly. It painstakingly dismantles the poisonous myths about Muslims spread in the British media and on the far right. I read it at a sitting and learnt something new from every page." —Peter Oborne, author, A Dangerous Delusion: Why the West Is Wrong About Nuclear Iran

"This is a remarkable, insightful, searingly honest book on how British Muslims live and feel and think, and how one can be a happy and fulfilled Muslim in a world so frequently defined by Islamicist extremists and racists.  For me, a progressive Muslim, it was like finding an oasis of intelligence and truths, of hope and possibilities." —Yasmin Alibhai-Brown, author, Refusing the Veil