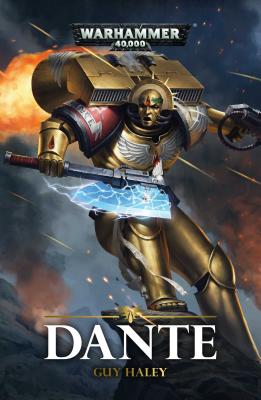 By Guy Haley
UNAVAILABLE AT THIS TIME (Possible reasons: Backordered, Out-of-Stock Indefinitely, or Print-on-Demand only)
OUT OF PRINT

The origin story of Dante and his rise from young aspirant to the mighty Chapter Master of the Blood Angels.

Dante is Chapter Master of one of the noblest but most troubled Chapters of Space Marines in the Imperium: the Blood Angels. From the time of his birth in the rad-scarred wastes of Baal Secundus, he was destined for glory and strife. From his apotheosis to Scout, to the hive cities of Armageddon and the alien menace of the Cryptas system, Dante has waged war against all the enemies of the Imperium. He has witnessed the divine, and struggled against the darkness within all sons of Sanguinius. Longer lived than any other Chapter Master, this is his chronicle, his great and storied legend.

Guy Haley is the author of the Horus Heresy novel Pharos, the Primarchs novel Perturabo, and two volumes in The Beast Arises series: Throneworld and The Beheading. He has also written many Warhammer 40,000 novels, including the Blood Angels novels The Devastation of Baal and Dante, the eldar novel Valedor, and the Imperial Battle Tanks novels Baneblade and Shadowsword. His enthusiasm for goblins and all things greenskin led him to pen the eponymous Warhammer fantasy novel Skarsnik, as well as the End Times novel The Rise of the Horned Rat. He has also written a number of novellas and short stories set in Warhammer’s new Age of Sigmar setting. He lives in Yorkshire, England with his wife and son.