And Then What?: Inside Stories of 21st-Century Diplomacy (Hardcover) 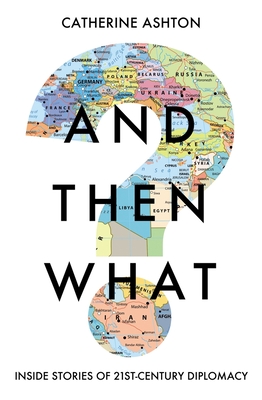 So much of modern-day diplomacy still takes place behind closed doors, away from cameras and prying eyes. So what does this vital role really look like in today’ s world – and what does it take to do it well?

From 2009 to 2014, Cathy Ashton was the EU’ s first High Representative for Foreign Affairs and Security, effectively Europe's foreign policy supremo responsible for coordinating the EU's response to international crises. Arriving in Brussels as a relative novice to international diplomacy, she faced the challenge of representing the views and values of 28 nations during one of the most turbulent times in living memory. Decades-old certainties were swept away in days. Hope rose and fell, often in a matter of hours.

From the frozen conflict of Ukraine to the Serbia-Kosovo deal, there were challenges, failures and moments of success. She encountered dictators and war criminals, and witnessed the aftermath of natural disasters, military action, and political instability. Working with US politicians and counterparts including John Kerry, Hillary Clinton, and Bill Burns, she negotiated historic settlements, such as the Iran nuclear deal. An ‘ honest broker’ , she navigated the needs of opposing politicians to chart a path towards collaboration and stability.

Now Ashton takes us behind the scenes to show us what worked and what didn’ t, and how it felt to be in ‘ the room where it happened’ . From Serbia to Somalia, Libya to Haiti, she offers essential insight into how modern diplomacy works, examining the tools needed to find our way through the many challenges we face today.

Baroness Catherine Ashton served as the European Union’s first High Representative for Foreign Affairs and Security Policy from 2009 to 2014, and the first female EU Commissioner for Trade. She is a life peer and former Leader of the House of Lords, as well as serving as a UK government minister in the Education and Justice departments. She is Chair of the Global Europe Programme at the Woodrow Wilson International Center for Scholars in Washington DC, senior policy advisor to Chatham House and a consultant to the Geneva-based Centre for Humanitarian Dialogue.