Overheard: The Art of Eavesdropping (Paperback) 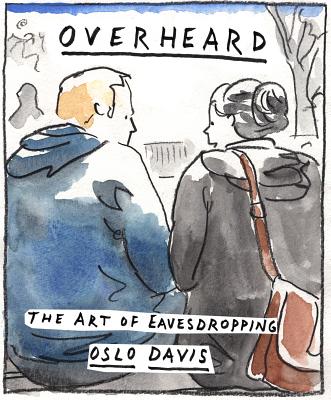 By Oslo Davis
Email or call for price.
Out of Print

Comments:
After living in NYC for over 20 years you'd think nothing would surprise me - but the conversations/eavesdropping that is depicted in this book makes me howl with laughter.  The artwork also has a personality of its own as well, definitely not taking itself too seriously and jives perfectly with the quotes.  I hope there will be a part II!

Oslo Davis has made a career of recording his observations of 'life in the city' for us all to enjoy. His Overheard cartoons capture the hilarious and the crazy, banal and sillyness of everyday life. While Oslo snoops on what people are talking about, we get to reflect on, and laugh at, the crazy things that occupy people's minds. The daughter telling her mother not to interfere in party preparations, the fat man pondering what is least bad to eat, the hipster commenting on what is truly hip.

No one escapes Oslo's eavesdropping. Indeed it could have been your conversation that he was listening in on as he wanders city streets...

Oslo Davis is an illustrator, artist and cartoonist. Oslo's work appears regularly in The Age newspaper as well as other magazines and literary journals. He has been commissioned by state galleries, libraries, and universities. He has been awarded a Creative Fellowship and is a former Walkley Award winner. He has authored a number of books, the most recent one, This Annoying Life was published by Chronicle Books in North America.