The Great Reset and its Health Dictatorship: A Guide to Freedom in the Post-Corona World (Paperback) 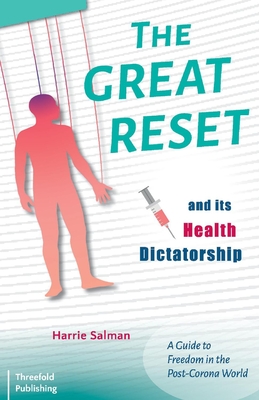 This new and compelling book by Harrie Salman is a manifesto in which he analyzes the ills of our times, calls out those persons and institutions he sees as responsible for those ills, and issues a call to action. He addresses that call to action to all of us who believe that individuals and groups working together can renew and liberate our society. He calls on us to become fully human and enrich our social lives—impoverished by the lockdowns of what he calls "the health dictatorship"—from the bottom up, with inspiration from the Divine. It is a noble call, and Harrie is quite aware that the tasks he outlines will not be easily accomplished.

Today, however, to take a stand for humanity is nothing less than a radical act of rebellion, of defiance, against a veritable blitzkrieg of dehumanizing technologies that are assaulting all human beings—in body, soul, mind and, most of all, spirit. From synthetic biology to geoengineering to universal covert and overt surveillance of everyone and everything, we human beings, all around the globe, are moving, like it or not, into a very Brave New World.

Harrie Salman presents a way out of a tragically polarized situation, in which people find themselves on one side or another believing that those on the other side have been "brainwashed." He coolly and succinctly identifies the pieces of the puzzle and puts them together in a coherent pattern that anyone, of any political persuasion, can recognize. –From the Preface by Ed Conroy

Harrie Salman, PhD is a Dutch philosopher of culture and society. He's taught philosophy at universities in Holland and Eastern Europe. For over 25 years he's taught Anthroposophy at the Department of Art Therapy of the State University of Applied Sciences in Leiden, Holland. Harrie Salman is fluent in seven Western European languages plus Russian and several Eastern European languages. He regularly gives seminars and workshops on spirituality and social consciousness to people in many countries. He has written ten books on Anthroposophy, European and Russian culture, among them "The Social World as Mystery Center".Ed Conroy edited the original edition of "Combating Cult Mind Control" by Steven Hassan (Park Street Press, an imprint of Inner Traditions International) before writing "Report on 'Communion,'" his investigation of the UFO/"visitor" experiences of author Whitley Strieber (William Morrow; Avon). He also edited other publications for Inner Traditions International on the Tarot, herbalism, and other subjects. Formerly an arts writer and urban affairs writer for the San Antonio Express-News, he was educated at the California Institute of the Arts in its School of Critical Studies, the Universidad Nacional Autónoma de México, and the University of Texas at San Antonio.