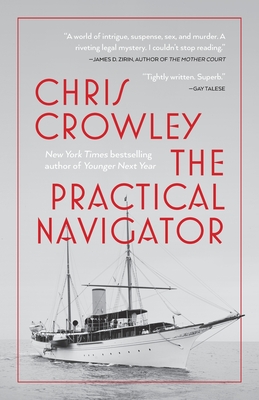 Perfect for fans of Scott Turow and John Lescroart, The Practical Navigator is a smart, fast-moving legal thriller where everyone's motives-and desires-are in question.

Membership in the Great Arcadia, an exclusive East Coast yacht club, is pretty much limited to the rich and powerful in 1980s business, finance, and politics. But the sexually charged murder of Greek billionaire George Minot during their annual regatta off the coast of Maine opens a door into a secret world of addictive sexuality and excess beneath the starched sheets of the East Coast establishment.

Tim Bigelow is looking forward to spending a week at sea with the magical Cassie Sears, who has suddenly appeared in his life. He's also there to celebrate his older brother, Harry-the retiring commodore of the Great Arcadia who's on course for a major role in the White House. That prospect slips away when Minot is murdered and details start to come out, including the alarming fact that Minot saw himself as a latter-day embodiment of the Minotaur-the half-man, half-bull creature who lurked in the Labyrinth beneath the ancient city of Knossos in one of the oldest myths in the Western canon.

From the decks of the world's finest yachts to the beds and boardrooms of some of the most powerful people in America to an electrifying courtroom trial in a dying coastal town, The Practical Navigator steers a course through its own labyrinth . . . a whirlpool of obsessive sexuality, murder, and despair.