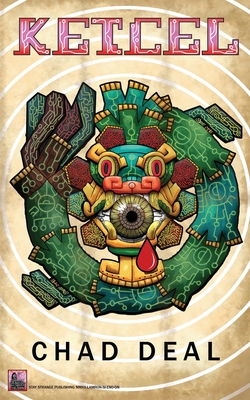 What does a highly subjective virtual reality say about "reality" itself? What does identity mean when our lives are split between our "real" selves and our "virtual" selves? Which is more "real," the body or the avatar?

Ketcel is an absurdist, hopeful-dystopian, psychedelic post-cyberpunk adventure, inspired by the half-truths of history, current events, and all-too-possible futures.

Every year, thousands of Americans are smuggled through narcotunnels beneath the monolithic US/Mexico border wall to find affordable healthcare in Tijuana. Don Collins, a retired timeshare salesman from Florida, finds himself running for his life after becoming an involuntary contestant on a ludicrous cartel game show. Luna Teschner, a rookie livecast journalist living in Mexico City, is contacted by an anonymous source offering access to Tijuana's secret corporate gulags. Tijuana's Haitian police captain, Kervens Dessalines, has a taste for designer telepathics and garter belts, but he's willing to give up everything he's worked for to find the woman whose body he keeps appearing in while stoned.

Don and Luna embark on a perilous journey through the desert wilds of borderland Baja, pursued by circuit-bent Border Patrol automatons, a geriatric cartel with a twisted sense of humor, and the constant need to captivate viewers. Along the way, they encounter unforgiving landscapes, rideshare pirates, deported aliens, noise punks, monster taco trucks, and the occasional hallucination to test the limits of their dumb luck and sanity.

This story is in the tradition of authors such as William Gibson, Neal Stephenson, Philip K. Dick, and Greg Egan, using an absurdist near-future to talk about current events, politics, border dynamics, and a little bit of philosophy. Think Black Mirror with a sense of humor, on a sturdy dose of psychedelics.