The Escape of Jack the Ripper: The Truth About the Cover-up and His Flight from Justice (Hardcover) 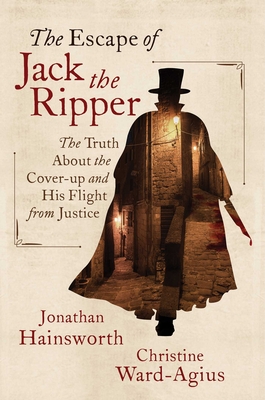 By Jonathan Hainsworth, Christine Ward-Agius
$29.99
UNAVAILABLE-Possible Reasons: Backordered, Out-of-Stock, or Out-of-Print (But email us to search for a copy.)

“I doubt that anyone else will be able to offer a more comprehensive portrait of this Ripper suspect than these authors have done.”—DR. KATHERINE RAMSLAND, Psychology Today

In 1888, five gruesome murders shocked the civilized public. A bloodthirsty killer was on the loose in the slums of London. The world was on the lookout for Jack the Ripper.

Scotland Yard never found their man—or so they said publicly. The police knew the killer’s identity but concealed it to save the ruling class from embarrassment.

The Escape of Jack the Ripper, the true story behind the Whitechapel murders, reveals how British elites manipulated the public to protect one of their own. Through meticulous research, including documents disclosed here for the first time, Jonathan Hainsworth and Christine Ward-Agius have uncovered the killer’s identity.

In The Escape of Jack the Ripper, you’ll learn:

A thoroughly researched and gripping tale, The Escape of Jack the Ripper solves the great Whitechapel murder mystery once and for all.

Jonathan Hainsworth is an Australian high school history teacher. In 2007, he began teaching about Victorian society. He chose “Jack the Ripper” as an entry point and, to his surprise, found that a Metropolitan Police chief had solved the case, albeit posthumously—but that in sharing the solution with the public he had carefully concealed “the Ripper’s” exact identity for reasons of propriety.

Christine Ward-Agius was born in Adelaide, South Australia, and is a researcher and working artist. She worked for many years in the welfare sector, gaining particular experience in a program designed to help empower women to escape poverty by means of education and employment. The insight gained from this area of work gave Christine an added interest while assisting her partner Jonathan Hainsworth in writing his first book on Jack the Ripper. Her patient detective work in the Druitt family archives, newspaper articles held in the British Library, and the records of English public schools unearthed previously unseen documentary and photographic evidence pointing clearly at Montague Druitt as the solution to the Whitechapel murders.