Green Fraud: Why the Green New Deal Is Even Worse than You Think (Hardcover) 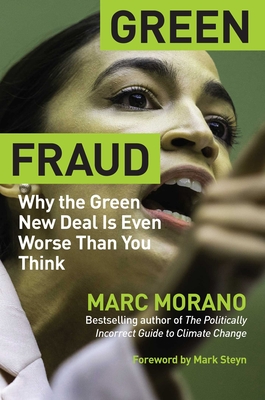 "If you care about America's future, read this book."—Mark Levin

"A must-read book that shows how the Green New Deal is dangerous, impractical, misguided, and guaranteed to fail with disastrous results for the American people.”—Sean Hannity

A New Lockdown to "Save" the Climate

That’s what’s in store for us if Alexandria Ocasio-Cortez and the Democrats pass their radical climate plan—the Green New Deal.

It is packed with guarantees so completely irrelevant to the problem it purports to “solve” (like “free college” and incomes for everyone “unable or unwilling to work”) that even its boosters have admitted it’s not really about the climate.

The intrepid Marc Morano, author of the bestselling Politically Incorrect Guide to Climate Change, breaks down the science and the politics to expose the truth about the Green New Deal:

• The science is settled: copious evidence—and prominent defections from the “climate consensus”—make clear we are not facing a man-made climate disaster

Climate change has already been “solved” multiple times over the past two decades—with highly touted international agreements—and yet it never goes away as an excuse for leftist policies that will cripple our economy, impoverish the world, and take away our freedoms.

Packed with telling statistics, damning quotations, and real science, Green Fraud is your source for all the facts you need to understand—and resist—the threat.

MARC MORANO is a former senior staff member of the Senate Environment and Public Works Committee, publisher of ClimateDepot.com, bestselling author The Politically Incorrect Guide to Climate Change and Green Fraud, and producer of Climate Hustle (2016) and Climate Hustle 2: Rise of the Climate Monarchy (2020).

“Green Fraud: Why the Green New Deal Is Even Worse Than You Think is the ultimate guidebook to exposing and fighting this Marxist plan masquerading as environmental policy. . . . If you care about America’s future, read this book.”  —Mark R. Levin, author and nationally syndicated TV and radio broadcaster

“This is a must-read book that shows how the Green New Deal is dangerous, impractical, misguided, and guaranteed to fail with disastrous results for the American people.”  —Sean Hannity, host of Hannity on Fox News and of the nationally syndicated radio program The Sean Hannity Show

“In Green Fraud, Morano shows that the growing movement from the Left isn’t about the climate at all—it’s about controlling every aspect of American lives and implementing broad, socialist policies.”  —Senator James Inhofe

“The Green New Deal is one of the gravest threats facing America. This indispensable book is the most comprehensive takedown of the plan you will ever read.”  —Brent Bozell, founder of the Media Research Center

“Marc Morano’s book Green Fraud provides a factual scientific and political account of the Green New Deal and other misanthropic and self-serving schemes of the global elite and their opportunistic or deluded acolytes.” —Will Happer, Cyrus Fogg Brackett Professor of Physics emeritus, Princeton University

“Morano’s probably single-handedly, in a civilian sense, the guy (other than me, of course) doing a better job of ringing the bells alarming people of what’s going on here.” —Rush Limbaugh, nationally syndicated radio host and bestselling author