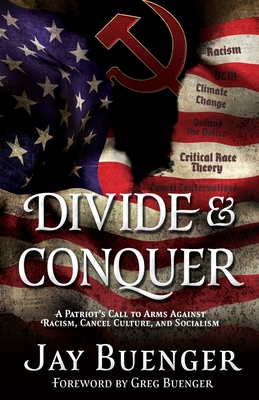 "That's racist " No statement in the twenty-first century triggers such a raw, polarizing, impassioned response as that short accusation. Racism is finding itself being applied to almost everything these days - politics, statues, history, graduations, books, movies, even math. Its role is no longer to describe oppression or genuine injustices in the world, but rather to promote and glamourize a political campaign, social movement, or fundraising effort in its name. In Divide & Conquer, author Jay Buenger analyzes the use of the political left's oldest and most trusted weapon - racism. He also dissects a number of other tools, from cancel culture, to government mandates, to propaganda, to mere feelings, that progressives and Washington elites are using to achieve their ultimate goal: power through division. Through the eyes of a long-time educator, Buenger warns of the true intentions of these weapons, and the effectiveness their use is having on our society - particularly on our minority communities and next generations. A cabal comprised of Democratic office holders, mainstream media, and the world of big tech are implementing a coordinated campaign to promote chaos and division, opening the door for excessive government reach and a one-way route to socialism. Divide & Conquer serves as a cautionary tale of the imminent dissolution our Republic faces if awareness and patriotism do not prevail. Jay Buenger was born and raised in the rural Texas town of Industry, TX - population 304. The son of a lifelong elementary teacher and country veterinarian, he developed the God-fearing, conservative values that he carries with him to this day. A love for sports and shaping America's youth led him into a career in teaching and coaching, a profession he has enjoyed for almost twenty years. Buenger currently resides just outside Brenham, TX with his beautiful wife, Elizabeth - also an educator of more than two decades. Along with a passion for writing, the two enjoy world-wide travel, cooking, and spending time outdoors in the tranquil Texas countryside. Jay is proud and excited to unveil Divide & Conquer, his debut publication.