The Wars of the Roses: A Captivating Guide to the English Civil Wars That Brought down the Plantagenet Dynasty and Put the Tudors on the Thro (Hardcover) 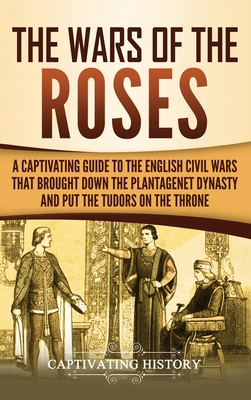 Explore the Captivating History of the Wars of the Roses

The Wars of the Roses were a complex set of battles, skirmishes, and kidnappings during the 15th century in England. They had their roots in the nearby Civil War of France, which greatly influenced English politics for years to come. Though there is no one universally-accepted start or end date for these wars, the major events throughout the wars occurred between 1455 and 1485.

The central reason for the Wars of the Roses, otherwise referred to as the 15th century English Civil War, was a tug-of-war between two families for the throne of England. Though both families were in fact closely related, they had split half a century earlier. Instead of one unified Plantagenet family, the cousins became Lancasters and Yorks. While the Lancasters remained on the throne, the Yorks were overlooked in the succession of kings. The Yorks became jealous, given their equal relation to England's ancient monarchy, and when the Plantagenet-Lancaster dynasty appeared tragically weakened by the succession of Henry VI, the royal cousins took the opportunity to demand a new ruler.

In The Wars of the Roses: A Captivating Guide to the English Civil Wars That Brought down the Plantagenet Dynasty and Put the Tudors on the Throne, you will discover topics such as

So if you want to learn more about the Wars of the Roses, click "add to cart"