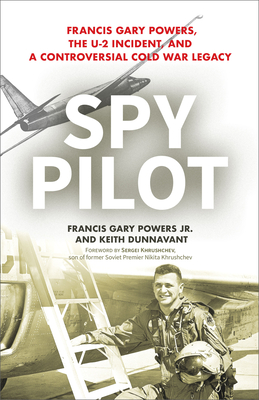 Based on newly available information, the son of famed U-2 pilot Francis Gary Powers presents the facts and dispels misinformation about the Cold War espionage program that turned his father into a Cold War icon..

One of the most talked-about events of the Cold War was the downing of the American U-2 spy plane piloted by Francis Gary Powers over the Soviet Union on May 1, 1960. The event was recently depicted in the Steven Spielberg movie Bridge of Spies. Powers was captured by the KGB, subjected to a televised show trial, and imprisoned, all of which created an international incident. Soviet authorities eventually released him in exchange for captured Soviet spy Rudolf Abel. On his return to the United States, Powers was exonerated of any wrongdoing while imprisoned in Russia, yet, due to bad press and the government's unwillingness to heartily defend Powers, a cloud of controversy lingered until his untimely death in 1977.
Now his son, Francis Gary Powers Jr. and acclaimed historian Keith Dunnavant have written this new account of Powers's life based on personal files that had never been previously available. Delving into old audio tapes, letters his father wrote and received while imprisoned in the Soviet Union, the transcript of his father's debriefing by the CIA, other recently declassified documents about the U-2 program, and interviews with the spy pilot's contemporaries, Powers and Dunnavant set the record straight. The result is a fascinating piece of Cold War history. This is also a book about a son's journey to understand his father, pursuing justice and a measure of peace.
Almost sixty years after the fact, this will be the definitive account of one of the most important events of the Cold War.

Francis Gary Powers Jr. is the founder and chairman emeritus of the Cold War Museum, a 501(c) (3) charity in Vint Hill, Virginia, near Washington, DC. As chairman of the Presidential Advisory Committee for the Cold War Theme Study, he works with the National Park Service and leading Cold War experts to identify historic Cold War sites for commemoration, interpretion, and preservation. He served as a consultant to Steven Spielberg's Cold War thriller, Bridge of Spies. He lectures internationally and appears regularly on the History, Discovery, and A&E channels.

Keith Dunnavant is the author of seven books, including definitive biographies of Joe Montana, Bart Starr, and Paul "Bear" Bryant. The founder of Solovox Publishing and a former editor of Adweek Magazines' Special Report and contributor to BusinessWeek, Dunnavant has led award-winning editorial teams covering media, sports, lifestyle, and politics; directed the civil rights documentary Three Days at Foster; and covered college football for The National. He has been a featured historian on ESPN, CBS, HBO, and Showtime.

“Biography, autobiography, the unraveling of a Cold War mystery, and a son’s mission to see his father honored. This book has it all.”

—Vin Arthey, author of Abel: The True Story of the Spy They Traded for Gary Powers

“The son of U-2 pilot Francis Gary Powers has written an in-depth, detailed account of his father’s life, the infamous U-2 shoot-down, and the aftermath. Much is revealed in this book, which is a must-read for those interested in the Cold War, intelligence, and aviation.”

“All too often, history has only a public face. When we think of Francis Gary Powers, we recall how on May 1, 1960, his U-2 spy plane was shot down over the Soviet Union, why he did not use the poisoned pin, and how his case became a Soviet show trial. This part of Powers’s life is a touchstone in the Cold War. All true, but history is also deeply personal. Powers’s fame cast a long shadow, shaping to various degrees the lives he touched. In Spy Pilot, a wonderfully researched and powerfully written account of Powers’s life, Keith Dunnavant and Francis Gary Powers Jr. tell the full story. Read it. It will move you in ways that few histories ever do.”

—Randy Roberts, 150th Anniversary Professor and Distinguished Professor of History, Purdue University, and coauthor of A Season in the Sun: The Rise of Mickey Mantle

“Spy Pilot is a deeply moving book of a son’s lifelong search to uncover the hidden history of his father. Gary Powers Jr. has done himself, his family, and his father proud with this fascinating, detailed, and loving account that is at once a detailed and informative history of the Lockheed U-2 and the men who designed, maintained, and flew it; a compelling biographical inquiry about his famous father, CIA spy pilot Francis Gary Powers, who was shot down over the Soviet Union by a surface-to-air missile on May 1, 1960; and a searching personal memoir of one man’s efforts to restore the reputation of his father, who was killed in a tragic news helicopter accident in August 1977. Knowing what pilot Powers actually did, readers will come away feeling dismayed at how badly he was treated upon his return from Soviet captivity, and impressed by the depth of his son’s love and devotion. Highly recommended!”

“Spy Pilot provides a unique perspective on one of the turning points of the Cold War. Francis Gary Powers Jr. tells the tale of his father’s fateful mission, and of his capture and imprisonment in the Soviet Union. The heart of the story, however, focuses on events that occurred after Powers returned to the United States. It is a chronicle of the pilot’s battle to salvage his reputation and dignity in the face of an indifferent and at times hostile government, a battle that his son waged for decades after Powers died in a tragic accident. Spy Pilot is also an intensely personal story about the loss of a father, and a son’s desperate efforts to understand a man he barely remembers.”

“Francis Gary Powers was a patriot who got a raw deal, and his son has devoted his life to revealing the truth.”

"An interesting account of a son’s long effort to ensure his father’s proper legacy.”

—Chris Pocock, author of The U-2 Spyplane: Toward the Unknown

“Francis Gary Powers Jr. brilliantly details his father’s painful turmoil as a CIA U-2 pilot. The stain on his father’s character, facilitated by America’s Cold War fears, caused him anguish that was exacerbated by his first wife’s behavior. Gary Jr., always knowing that his father was a true American patriot and a loving parent, helped clear his father’s name and bring closure to his life’s journey. I can relate to Gary’s pain because the crew of the USS Liberty has endured a similar fate, which still continues to this day.”

“To most of us, Francis Gary Powers was an abstraction, a name in a history book. The same as Charlemagne, Martin Luther, or Gandhi. After Spy Pilot, we can never say that again. Powers is now a son, a husband, a father. Like all of us, he had dreams, fears, passions, courage, rage, and an overwhelming desire to make a difference. Spy Pilot is our chance to finally meet the man behind the legend.”

“Francis Gary Powers Jr. has been a tireless and admirable advocate on behalf of the legacy of his father, U-2 pilot Francis Gary Powers, as well as on the preservation of Cold War history, by establishing the Cold War Museum, and through his many speaking engagements, his meticulous collection of personal artifacts on exhibit at multiple institutions and organizations, and now the publication of this book with Keith Dunnavant. Like our father and grandfather James B. Donovan, whose both defense of Russian spy colonel Rudolf Abel and steadfast commitment to American democratic ideals and the US Constitution were unpopular at the time, Francis Gary Powers was subjected to the same national unpopularity, yet he remained true to the country both he and Donovan served: The United States of America. This book is a personal, poignant, and touching tribute to a man who loved his son and family; a new understanding of an American patriot; and a thoughtful, insightful analysis of the events linking our families together in history, for generations to come.”

—Mary Ellen Donovan Fuller, Beth Amorosi, and the entire family of Cold War lawyer James B. Donovan, who was portrayed by Tom Hanks in Steven Spielberg’s Bridge of Spies