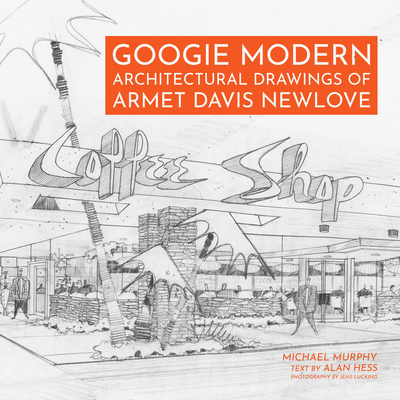 By Michael Murphy, Alan Hess (Text by (Art/Photo Books))
$50.00
UNAVAILABLE-Possible Reasons: Backordered, Out-of-Stock, or Out-of-Print (But email us to search for a copy.)

A highly visual monograph of plans and concept drawings from the Armet Davis Newlove firm, the creator of what became known as "Googie Modern."

In Googie Modern: Architectural Drawings of Armet Davis Newlove, author Michael Murphy takes readers inside the private archives of the forward-thinking trio dubbed the "fathers of Googie." Inspiring not just artists and filmmakers but the public at large, their futuristic coffee shops and restaurants made dining out a space-age experience, just as man was ready to walk on the moon. Armet Davis Newlove's architecture captured the optimistic and forward-thinking mood in post-war America and set the bar for what would become Mid-Century Modern style. The firm's high-concept designs shaped Southern California and then took off across the American landscape, giving the US innovative, practical, and gorgeous monuments of everyday life. Each remarkable rendering demonstrates the passion and precision that went into every Armet Davis Newlove creation. Googie Modern is itself a monument to the excitement and optimism that once lined the streets of mid-century America.

Michael Murphy is a former agency Art Director gone independent design professional and real-estate entrepreneur. He has had the privilege to design a traveling exhibition called Vedem Underground that deconstructs and reinterprets the literary work of the teenage Jewish creators of the longest-running underground magazine in a Nazi camp, which Smithsonian hailed as one of the 10 "Don't Miss..." new exhibits in 2017/2018.In the last few years with his photographic partner Jens Lucking, he has created two books and two exhibitions about Santa Monica in 1902 and 1917 respectively as well as a postcard book "Los Angeles: A Look Back To Postcards of the 1930s & 1940s from Today". He is currently focusing his efforts launching LookBackArt, a brand that celebrates history through time and place and LWH Properties, a development company that focuses on housing and community.Alan Hess is author of twenty books on Modern architecture including the landmark Googie: Fifties Coffee Shop Architecture in 1985. His other subjects include Oscar Niemeyer, Frank Lloyd Wright, Ranch houses, Las Vegas, and Palm Springs. He serves on the California Historical Resources Commission, and the Preserve Orange County and Palm Springs Modernism Week boards. Buildings he's landmarked include CBS Television City, Bullock's Pasadena, Norm's La Cienega, and the nation's oldest McDonald's stand. He's received the National Trust for Historic Preservation's Honor Award, Docomomo/US's Award of Excellence, and the Los Angeles Conservancy's President's Award.