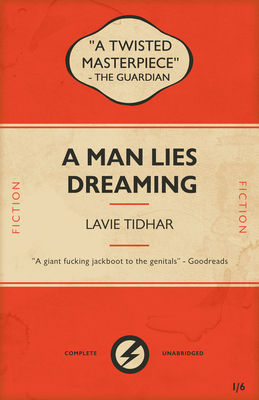 “Tidhar's brilliant novel channels pulp fiction conventions to grapple with the horrors of the Holocaust. In its opening pages, readers are dropped into late 1930s England where Oswald Mosley is about to become prime minister and Hitler, whose Nazi party was defeated by the Communists, is a down-at-the-heels private investigator, a sad and tortured little man. As it turns out, this alternate history is a fever dream of a prisoner at Auschwitz. Who is to say that turning the powerful into the defeated -- even as a fantasy -- isn't an important tool in coping with brutality and dehumanization?”
— Anmiryam Budner (E), Main Point Books, Bryn Mawr, PA

“The best book I read last year is A Man Lies Dreaming by Lavie Tidhar... It is so cleverly constructed and such a spectacular conclusion unfolds that you are going to take it all very seriously.” – Sting

Since its original 2014 publication, A Man Lies Dreaming has been translated into multiple languages and gained a cult following for its dark humor, prescient politics and powerful exploration of the impossibility of fantasy.

1939: Adolf Hitler, fallen from power, seeks refuge in a London engulfed in the throes of a very British Fascism. Now eking a miserable living as a down-at-heels private eye and calling himself Wolf, he has no choice but to take on the case of a glamorous Jewish heiress whose sister went missing.

For in another time and place a man lies dreaming: Shomer, once a Yiddish pulp writer, who dreams lurid tales of revenge in the hell that is Auschwitz.

Prescient, darkly funny and wholly original, the award-winning A Man Lies Dreaming is a modern fable for our time that comes “crashing through the door of literature like Sam Spade with a .38 in his hand” (Guardian).

“Tidhar is a genius at conjuring realities that are just two steps to the left of our own.” –NPR
“Tidhar changes genres with every outing, but his astounding talents guarantee something new and compelling no matter the story he tells.” –Library Journal
“In a genre entirely of his own, and quite possibly a warped genius.” –Ian McDonald, author of River of Gods
“Already staked a claim as the genre’s most interesting, most bold, and most accomplished writer.” –Locus
“Tidhar is a master at taking concepts that really shouldn’t work and crafting them into something uniquely brilliant.” –GeekDad
“He is perhaps the UK’s most literary speculative fiction writer.” –Strange Horizons
“Like early Kurt Vonnegut… both writers seem to channel the same prankster glee that covers deep despair.” –Locus
“Bears comparison with the best of Philip K Dick” –The Financial Times

PRAISE FOR A MAN LIES DREAMING

Lavie Tidhar is author of Osama, The Violent Century, A Man Lies Dreaming, Central Station, and Unholy Land, as well as the Bookman Histories trilogy. His latest novels are By Force Alone, children’s book The Candy Mafia and comics mini-series Adler. His awards include the World Fantasy Award, the British Fantasy Award, the John W. Campbell Award, the Neukom Prize and the Jerwood Fiction Uncovered Prize.