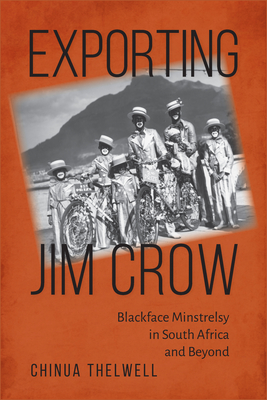 By Chinua Thelwell
$27.95
OUT-OF-PRINT & UNAVAILABLE! (But email us to search for a used copy.)

Following the pathways of imperial commerce, blackface minstrel troupes began to cross the globe in the mid-nineteenth century, popularizing American racial ideologies as they traveled from Britain to its colonies in the Pacific, Asia, and Oceania, finally landing in South Africa during the 1860s and 1870s. The first popular culture export of the United States, minstrel shows frequently portrayed black characters as noncitizens who were unfit for democratic participation and contributed to the construction of a global color line.

Chinua Thelwell brings blackface minstrelsy and performance culture into the discussion of apartheid's nineteenth-century origins and afterlife, employing a broad archive of South African newspapers and magazines, memoirs, minstrel songs and sketches, diaries, and interview transcripts. Exporting Jim Crow highlights blackface minstrelsy's cultural and social impact as it became a dominant form of entertainment, moving from its initial appearances on music hall stages to its troubling twentieth-century resurgence on movie screens and at public events. This carefully researched and highly original study demonstrates that the performance of race in South Africa was inherently political, contributing to racism and shoring up white racial identity.

CHINUA THELWELL is assistant professor of history and Africana studies at William & Mary.

"Historical in nature and based on archival research and an extensive reading of historiography about blackface minstrelsy and racial and labor relations in South Africa, Exporting Jim Crow charts the importance of minstrelsy in forging a distinctive white settler identity in South Africa."—Kevin K. Gaines, author of African Americans in Ghana: Black Expatriates and the Civil Rights Era

"Thelwell's scholarship is impressive. This is essential reading for those interested in the transnational reach of blackface minstrelsy."—Sandra Jean Graham, author of Spirituals and the Birth of a Black Entertainment Industry