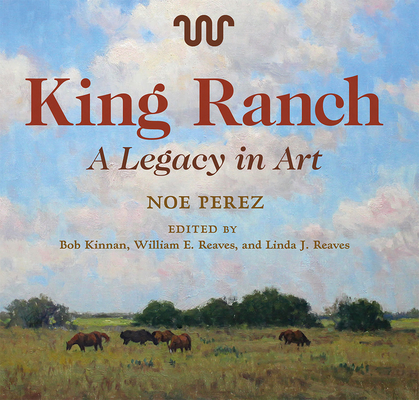 Covering 825,000 acres in the Coastal Plain and Brush Country of South Texas, King Ranch, established in 1853, looms large in Texas and American history. Since its founding by the energetic and visionary Richard King, it has indelibly captured for generations the essence of the American West. As Tom Lea asserted in his epic 1953 history, the spirit of the place “is alive in the land itself, in the far quietness of growing grass and grazing herds.”

In King Ranch: A Legacy in Art, editors Bob Kinnan, William E. Reaves, and Linda J. Reaves have assembled a team of collaborators to present a beautiful, informative account of the ranch and its place in the artistic heritage of the region. Pairing original paintings by artist Noe Perez with insightful essays from curators Bruce Shackelford and Ron Tyler, this book celebrates the many ways “King Ranch culture” has enriched appreciation for the decorative, practical, and fine arts in Texas and the greater American West.

Opening with a foreword by Jamey Clement, former chair of the board for King Ranch, Inc., and continuing with a brief introduction to the ranch’s history by Bob Kinnan, King Ranch: A Legacy in Art will heighten appreciation of the natural beauty and artistic influence of this legendary place.

NOE PEREZ, a South Texas native, is one of the state’s foremost contemporary landscape artists. He received a commission from King Ranch to create the painting commemorating the one-hundred-year anniversary of the historic Main House. His work has been exhibited at museums and other venues throughout Texas and is included in Texas Traditions: Contemporary Artists of the Lone Star State. He lives in Corpus Christi. BOB KINNAN previously managed the Santa Gertrudis Heritage Society and King Ranch Archives and has been King Ranch Historian since 2016. WILLIAM E. REAVES is the author of Texas Art and a Wildcatter’s Dream, coauthor for Of Texas Rivers and Texas Art, and coeditor of Sense of Home: The Art of Richard Stout. LINDA J. REAVES is coeditor of Sense of Home: The Art of Richard Stout and coauthor of A Book Maker's Art: The Bond of Arts and Letters at Texas A&M University Press