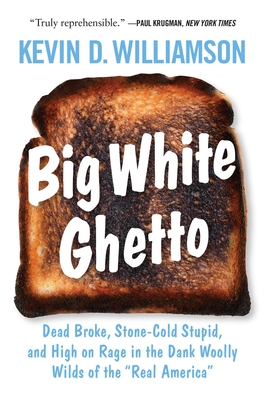 "You can't truly understand the country you're living in without reading Williamson." —Rich Lowry, National Review

"His observations on American culture, history, and politics capture the moment we're in—and where we are going." —Dana Perino, Fox News

An Appalachian economy that uses cases of Pepsi as money. Life in a homeless camp in Austin. A young woman whose résumé reads, “Topless Chick, Uncredited.”

Coming from the world he writes about, Williamson understands it in a way that most commentators on American politics and culture simply can’t. In these sometimes savage and often hilarious essays, he takes readers on a wild tour of the wreckage of the American republic—the “white minstrel show” of right-wing grievance politics, progressive politicians addicted to gambling revenue, the culture of passive victimhood, and the reality of permanent poverty.

KEVIN D. WILLIAMSON has written for the Wall Street Journal, Washington Post, Indian Express, Playboy, The New Criterion, Academic Questions, and Commentary, and for an infamous three days he was a staff writer at The Atlantic. A reporter and columnist for National Review, he has taught at Hillsdale and the King’s College and writes a regular column for the New York Post. His previous books include The Smallest Minority: Independent Thinking in the Age of Mob Politics.

“No commentator on America’s current discontents matches Kevin Williamson’s written pyrotechnics, which feature indignation laced with wit and information delivered with moral urgency. He writes often about the problem of addiction but is himself a cause of a wholesome addiction. I am among the many readers who are Williamson addicts.”

“When Kevin Williamson posts a piece, I shush the room so I can concentrate on every word. His observations on American culture, history, and politics capture the moment we’re in—and where we are going.”

“Kevin Williamson may be one of the most difficult writers in America to categorize. He’s an unapologetic defender of some unfashionable orthodoxies and a blistering critic of fashionable pieties—across the ideological spectrum. This collection is Williamson in full: Veering between laugh-out-loud funny and soberingly, even dismayingly, insightful, he brings an unsparing eye for the truth as he finds it. As difficult as Kevin is to label, he’s even harder to ignore, as anyone lucky enough to pick up this book will soon discover.”

“This book is classic Kevin Williamson—wildly entertaining, unsparing, brimming with insight, eloquent, and, above all, fearless. You can’t truly understand the country you’re living in without reading Williamson on the white working class that he himself came from and that he vividly describes without regard to any piety, right or left.”