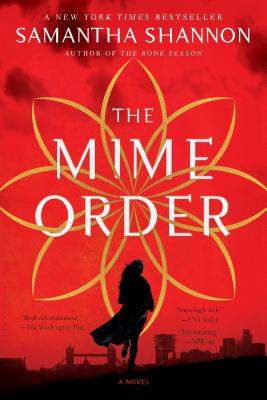 By Samantha Shannon
$17.00
UNAVAILABLE-Possible Reasons: Backordered, Out-of-Stock, or Out-of-Print (But email us to search for a copy.)

This is book number 2 in the Bone Season series.

Having high expectations for a sequel is always chancy, but I couldn't help it! Yet I loved this book *more* than I had expected to and ended up tearing my way through it, gasping and flailing through delightfully deviant plot twists, scarily ominous mysteries, and thrilling action scenes that had my favorite characters fighting not only for their lives, but their very souls, morals, and identities. And let me just categorically state that Paige Mahoney is the most believably badass protagonist I have ever encountered.

Part alternate history fantasy, part political thriller, this dystopian series (which is refreshingly not set in the far, far flung future) will leave you exhilarated and yearning for more... thank the "zeitgeist" The Mime Order is just the second in a planned 7 book series!

Paige Mahoney has escaped the brutal prison camp of Sheol I, but her problems have only just begun: many of the survivors are missing and she is the most wanted person in London . . .

As Scion turns its all-seeing eye on Paige, the mime-lords and mime-queens of the city's gangs are invited to a rare meeting of the Unnatural Assembly. Jaxon Hall and his Seven Seals prepare to take center stage, but there are bitter fault lines running through the clairvoyant community and dark secrets around every corner.

Then the Rephaim begin crawling out from the shadows. Paige must keep moving, from Seven Dials to Grub Street to the secret catacombs of Camden, until the fate of the underworld can be decided.

Samantha Shannon was born in West London in 1991. She started writing at the age of fifteen and studied English language and literature at St. Anne's College, Oxford. The Bone Season, the first in a seven-book series, was a New York Times bestseller and the inaugural Today Book Club selection. It has been translated into twenty-eight languages and film rights have been sold to 20th Century Fox. The Mime Order is her second novel. @say_shannonwww.samantha-shannon.blogspot.com