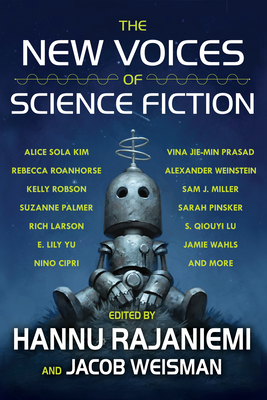 In this daring anthology of cutting-edge short stories, new science fiction luminaries including Rebecca Roanhorse, Amal El-Mohtar, and Sam J. Miller, are showcased with the rising stars that are transforming their genre. Discover exciting writers who are already out of this world, in this space-age sequel to the 2018 World Fantasy Award-winning anthology, The New Voices of Fantasy. STARRED REVIEW] "Superlative." --Publishers Weekly Your future is bright After all, your mother is a robot, your father has joined the alien hive-mind, and your dinner will be counterfeit 3D-printed steak. Even though your worker bots have staged a mutiny, and your tour guide speaks only in memes, you can always sell your native language if you need some extra cash. In The New Voices of Science Fiction, you'll find the rising stars of the last five years: Rebecca Roanhorse, Amal El-Mohtar, Alice Sola Kim, E. Lily Yu, Rich Larson, Vina Jie-Min Prasad, Sarah Pinsker, Darcie Little Badger, Nino Cipri, S. Qiouyi Lu, Kelly Robson, and more. These extraordinary stories have been hand-selected by cutting-edge and award-winning author Hannu Rajaniemi (The Quantum Thief, Summerland) and genre expert, World Fantasy Award winner, Jacob Weisman (Invaders, The Sword & Sorcery Anthology). So go ahead, join the interstellar revolution. The new kids already hacked the AI. "These authors show us the new new things, from global cataclysms to personal transformations that get us lost in entirely unprecedented landscapes. They are here to wake us, by giving us new waking dreams. Read them, and be changed." --Hannu Rajaniemi, editor.