The Consequences of Loyalism: Essays in Honor of Robert M. Calhoon (Hardcover) 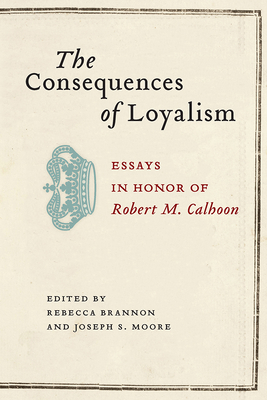 Since the 1970s scholars have regarded Robert M. Calhoon as an invigorating and definitive force when it comes to the study of American Loyalism. His decades-long work redefined the Loyalists' role in the American Revolution from being portrayed as static characters opposing change to being seen eventually as reactionary actors adapting to a society in upheaval. Loyalists were central to the Revolution, and Calhoon and these authors argue that they were not so different in ideology from their Patriot neighbors--except occasionally when they were.

The Consequences of Loyalism, Rebecca Brannon and Joseph S. Moore seek to provide an understanding of Calhoon's foundational influence and the development continuing in the wake of his prolific career. This volume unites sixteen previously unpublished essays that build on Calhoon's work and consider Loyalism's relationship to conflict resolution, imperial bureaucracy, and identity creation. In the first of two sections, established and rising scholars discuss the complexities of Loyalist identity, while considering Calhoon's earlier work. In the second section, scholars work from Calhoon's later publications to investigate Loyalism in terms of the consequences of Loyalism for the Loyalists, and for the legacy of the Revolutionary War. The Consequences of Loyalism offers a bold, new reinterpretation of Loyalism. This book brings Loyalist dilemmas alive, digging into their personalities and postwar routes. The essays discuss not only Loyalists' experiences during the Revolution, but also their coping and even reintegration in the aftermath. Loyalists from all facets of society fought for what they considered their home country: women wrote letters, commanders took to the battlefield, and thinkers shaped the political conversation. This volume complements Calhoon's influential work, expands the scope of Loyalist studies, and opens the field to a deeper, perhaps revolutionary understanding of the king's men.

Joseph S. Moore is an associate professor of history, department chair, and special assistant to the president at Gardner-Webb University. He is the author of Founding Sins: How a Group of Antislavery Radicals Fought to Put Christ into the Constitution. Moore's work has appeared in Slavery & Abolition, the New York Times, and a range of journals and newspapers.