A Nation Unmade by War (Paperback) 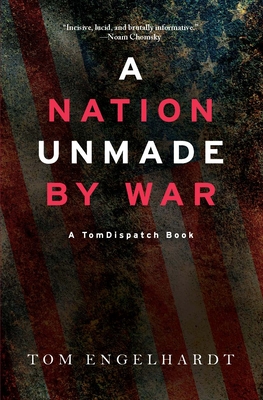 As veteran author Tom Engelhardt argues, despite having a more massive, technologically advanced, and better-funded military than any other power on the planet, in the last decade and a half of constant war across the Greater Middle East and parts of Africa, the United States has won nothing. Its unending wars, in fact, have only contributed to a world growing more chaotic by the second.

From its founding, the United States has been a nation made by wars. Through incisive analysis and characteristic wit, Engelhardt ponders whether in this century, its citizenry and government will be unmade by them.

Tom Engelhardt created and runs the TomDispatch.com website, a project of the Nation Institute, where he is a fellow. He is the author of The United States of Fear, Shadow Government, and The American Way of War all published by Haymarket Books; a highly praised history of American triumphalism in the cold war, The End of Victory Culture, and a novel, The Last Days of Publishing.

Tom Engelhardt created and runs the TomDispatch.com website, a project of the Nation Institute, where he is a fellow. He is the author of, United States of Fear, Shadow Government, The American Way of War and The United States of Fear, both published by Haymarket Books, a highly praised history of American triumphalism in the cold war, The End of Victory Culture, and a novel, The Last Days of Publishing. Many of his TomDispatch interviews were collected in Mission Unaccomplished: TomDispatch Interviews with American Iconoclasts and Dissenters. With Nick Turse, he has written Terminator Planet: The First History of Drone Warfare, 2001-2050. He also edited The World According to TomDispatch: America in the New Age of Empire, a collection of pieces from his site that functions as an alternative history of the mad Bush years. TomDispatch is the sideline that ate his life. Before that he worked as an editor at Pacific News Service in the early 1970s, and, these last four decades as an editor in book publishing. For fifteen years, he was senior editor at Pantheon Books, where he edited and published award-winning works ranging from Art Spiegelman's Maus and John Dower's War Without Mercy to Eduardo Galeano's Memory of Fire trilogy. He is now Consulting Editor at Metropolitan Books, as well as the cofounder and coeditor of Metropolitan's the American Empire Project, where he has published bestselling works by Chalmers Johnson, Andrew Bacevich, Noam Chomsky, and Nick Turse, among others. Many of the authors whose books he has edited and published over the years now write for TomDispatch.com. For a number of years, he was also a Teaching Fellow at the Graduate School of Journalism at the University of California, Berkeley. He is married to Nancy J. Garrity, a therapist, and has two children, Maggie and Will, and a grandchild, Charlie.