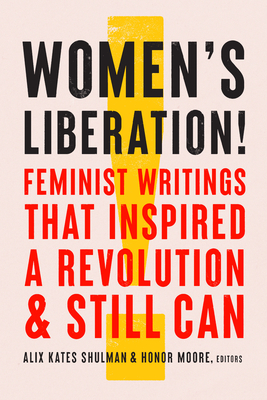 When Betty Friedan published The Feminine Mystique in 1963, the book exploded into women’s consciousness. Before the decade was out, what had begun as a campaign for women’s civil rights transformed into a diverse and revolutionary movement for freedom and social justice that challenged many aspects of everyday life long accepted as fixed: work, birth control and abortion, childcare and housework, gender, class, and race, art and literature, sexuality and identity, rape and domestic violence, sexual harassment, pornography, and more. This was the women’s liberation movement, and writing—powerful, personal, and prophetic—was its beating heart.

Fifty years on, in the age of #MeToo and Black Lives Matter, this visionary and radical writing is as relevant and urgently needed as ever, ready to inspire a new generation of feminists. Activists and writers Alix Kates Shulman and Honor Moore have gathered an unprecedented collection of works—many long out-of-print and hard to find—that catalyzed and propelled the women’s liberation movement. Ranging from Friedan’s Feminine Mystique to Backlash, Susan Faludi’s Reagan-era requiem, and framed by Shulman and Moore with an introduction and headnotes that provide historical and personal context, the anthology reveals the crucial role of Black feminists and other women of color in a decades long mass movement that not only brought about fundamental changes in American life—changes too often taken for granted today—but envisioned a thoroughgoing revolution in society and consciousness still to be achieved.

Alix Kates Shulman, who in 1967 became a leading activist in the women's liberation movement, is the author of five novels, including the best-selling Memoirs of an Ex-Prom Queen, three memoirs, including the award-winning Drinking the Rain, two books on the anarchist Emma Goldman, an essay collection, and three children's books.

Honor Moore is the author of the memoirs Our Revolution: A Mother and Daughter at Midcentury and The Bishop's Daughter, the latter a National Book Critics Circle Award finalist, and the biography The White Blackbird: A Life of the Painter Margarett Sargent by Her Granddaughter, a New York Times Notable Book. She is the editor of two volumes in Library of America's American Poets Project: Poems from the Women's Movement and Amy Lowell: Selected Poems.

"Both a comprehensive introduction to the movement and a persuasive defense of its revolutionary nature." —Publishers Weekly

“It’s hard to remember, especially if you weren’t yet born, about the rights women have not always enjoyed, the laws that undervalued women, or the cultural mores that subordinated us. I was born, grew up, and came of age in the tumultuous times this anthology covers (1960s-1990s) and these writings became foundational for me and millions of other women: Simone de Beauvoir, Kate Millet, Audre Lorde, Susan Brownmiller, Maxine Hong Kingston, bell hooks, (to name a few) and their texts about abortion, pornography, birth control, sexuality, identity, family, sexual harassment, the erotic, sisterhood, date rape, race, and a constellation of social justice issues precipitated a future more appealing than our past. It was here, within these ninety(ish) pieces, women began to subvert their position as Other through writing, meaning other than the default: men. Shulman and Moore have also been activists and participants in the feminist movement from the start, and created feminist literature themselves. Ordered chronologically, these pieces smartly convey the movement’s development; it’s important to know from whence feminism came in order to know where we are going, and this anthology sculpts a path for that to happen.” —Kerri Arsenault, LitHub