There Are No Names for Red (Paperback) 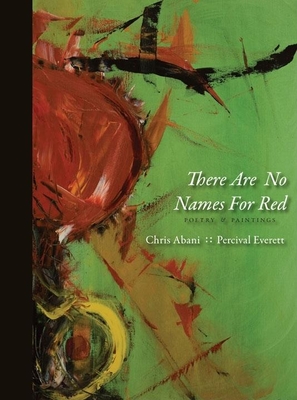 There Are No Names for Red is a collaborative work featuring the poetry of Chris Abani and the paintings of Percival Everett.

Chris Abani's prose includes Song For Night (Akashic, 2007), The Virgin of Flames (Penguin, 2007), Becoming Abigail (Akashic, 2006), GraceLand(FSG, 2004), and Masters of the Board (Delta, 1985). His poetry collections are Hands Washing Water (Copper Canyon, 2006), Dog Woman (Red Hen, 2004), Daphne's Lot (Red Hen, 2003), and Kalakuta Republic (Saqi, 2001). He is a Professor at the University of California, Riverside and the recipient of the PEN USA Freedom-to-Write Award, the Prince Claus Award, a Lannan Literary Fellowship, a California Book Award, a Hurston/Wright Legacy Award, a PEN Beyond the Margins Award & the PEN Hemingway Book Prize.

"Chris Abani's poems remind us of what happens when moral boundaries are obliterated and the sacredness of life becomes a kind of cynical joke. But these poems also remind us of the human capacity for compassion and love in the face of unspeakable cruelty and fiendish conditions. Chris Abani and his poems matter to all."

“Between 1985 and 1991, as a result of his anti-government writings, Nigerian author and poet Chris Abani was repeatedly thrown into prison and tortured by his country’s military dictatorship. During one such spell, Abani, who was eighteen the first time he was sentenced, found himself imprisoned alongside musician Fela Kuti, whose own artistic output set him in almost constant conflict with Nigeria’s ruling elite. On hearing how his fellow inmate had wound up there, Kuti offered an ironic warning: “Truth, my friend, is a risky business.”—Daniel Trilling, The Observer

“. . . the most naked . . . expression of prison life and political torture imaginable.”—Harold Pinter, on Kalakuta Republic