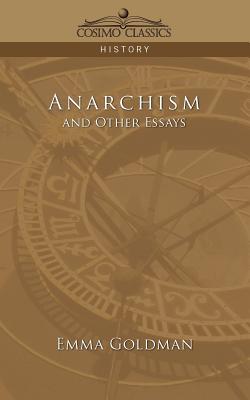 Destruction and violence How is the ordinary man to know that the most violent element in society is ignorance; that it's power of destruction is the very thing Anarchism is combating? - Emma Goldman, from "Anarchism: What It Really Stands For" From the turn of the 20th century to the turn of the 21st, the fiery words of "notorious" anarchist Emma Goldman continue to echo with passion, insight, and intelligence. Beyond the title essay, Goldman's impassioned calls for equality, individual freedom, and social justice encompass: . Minorities versus Majorities . The Psychology of Political Violence . Prisons: A Social Crime and Failure . Patriotism: A Menace to Liberty . The Hypocrisy of Puritanism . The Traffic in Women . The Tragedy of Women's Emancipation . Marriage and Love . The Drama: A Powerful Disseminator of Radical Thought . and more. They were prophetic when they were first published in 1910, but these essays demonstrate that even today Goldman, a thinker of profound wisdom, has not yet seen her time come. Also available from Cosimo Classics: The Social Significance of Modern Drama, by Emma Goldman. Anarchist and feminist EMMA GOLDMAN (1869-1940) is one of the towering figures in global radicalism of the late 19th and early 20th centuries. Born in Lithuania, she emigrated to the United States as a teenager, was deported in 1919 for her criticism of the U.S. military draft in World War I, and died in Toronto after a globetrotting life. An early advocate of birth control, women's rights, and workers unions, she was an important and influential figure in such far-flung geopolitical events as the Russian Revolution and the Spanish Civil War. Among her many books are My Disillusionment in Russia (1925) and Living My Life (1931).