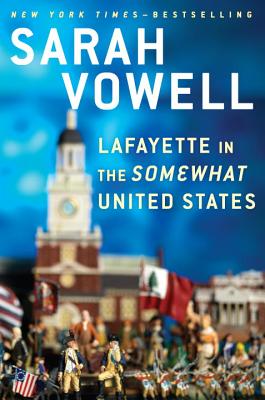 By Sarah Vowell
$27.95
UNAVAILABLE-Possible Reasons: Backordered, Out-of-Stock, or Out-of-Print (But email us to search for a copy.)

From the bestselling author of Assassination Vacation and The Partly Cloudy Patriot, an insightful and unconventional account of George Washington’s trusted officer and friend, that swashbuckling teenage French aristocrat the Marquis de Lafayette.

Chronicling General Lafayette’s years in Washington’s army, Vowell reflects on the ideals of the American Revolution versus the reality of the Revolutionary War.  Riding shotgun with Lafayette, Vowell swerves from the high-minded debates of Independence Hall to the frozen wasteland of Valley Forge, from bloody battlefields to the Palace of Versailles, bumping into John Adams, Thomas Jefferson, Lord Cornwallis, Benjamin Franklin, Marie Antoinette and various kings, Quakers and redcoats along the way.

Drawn to the patriots’ war out of a lust for glory, Enlightenment ideas and the traditional French hatred for the British, young Lafayette crossed the Atlantic expecting to join forces with an undivided people, encountering instead fault lines between the Continental Congress and the Continental Army, rebel and loyalist inhabitants, and a conspiracy to fire George Washington, the one man holding together the rickety, seemingly doomed patriot cause.

While Vowell’s yarn is full of the bickering and infighting that marks the American past—and present—her telling of the Revolution is just as much a story of friendship: between Washington and Lafayette, between the Americans and their French allies and, most of all between Lafayette and the American people.  Coinciding with one of the most contentious presidential elections in American history, Vowell lingers over the elderly Lafayette’s sentimental return tour of America in 1824, when three fourths of the population of New York City turned out to welcome him ashore.  As a Frenchman and the last surviving general of the Continental Army, Lafayette belonged to neither North nor South, to no political party or faction.  He was a walking, talking reminder of the sacrifices and bravery of the revolutionary generation and what the founders hoped this country could be. His return was not just a reunion with his beloved Americans it was a reunion for Americans with their own astonishing, singular past.

Sarah Vowell is the bestselling author of Lafayette in the Somewhat United States, Unfamiliar Fishes, The Wordy Shipmates, Assassination Vacation, and The Partly Cloudy Patriot.

"[A] freewheeling history of the Revolutionary War... Vowell points out that Lafayette was for a time 'a national obsession.'" —The New Yorker

“Vowell wanders through the history of the American Revolution and its immediate aftermath, using Lafayette’s involvement in the war as a map, and bringing us all along in her perambulations…Her prose sparkles.”—The New York Times Book Review

“[Vowell] takes an open and observant 'Hey, that’s nuts' stance toward past and present, which results in a book that’s informative, funny and insightful.” —TIME

“Gilded with snark, buoyant on charm, Vowell's brand of history categorically refuses to take itself — or any of its subjects — too seriously….At once light-footed and light-hearted, her histories are — dare I say it — fun. And Lafayette is no different. Even amid defeats... Vowell emerges from the Revolutionary War with an unabashed smile on her face. I'd be surprised if her reader doesn't, too.” —NPR

"[Vowell] turns the dusty chronicle of American history into a lively mash up and then, playing the history nerd, delivers her stories in her flat funny voice.” —The National Book Review

“Sarah Vowell turns her keen eye and droll wit to the American Revolution in her latest historical venture, Lafayette in the Somewhat United States… Vowell, of course, doesn't just give us the highlights; she offers a portrait of [Lafayette] and his older contemporaries, with whom he found friendship, glory, and endless bickering.” —Cosmopolitan

“Vowell takes on American history as only she can, this time with the story of Frenchman theMarquis de Lafayette, a Revolutionary War hero.” —USA Today

“To impress the history buff at the table, read Vowell’s (ever the expert in, really, everything) in-depth and irreverent account of George Washington’s decorated general Lafayette, which also looks to our own political climate for context.”—Marie Claire

“Nobody recounts American history the way Sarah Vowell does, with irreverence and humor and quirky details — history and facts, but also entertainment. [Lafayette in the Somewhat United States] is about the friendship between George Washington and the Marquis de Lafayette, but in Vowell’s inimitable style it is also firmly grounded in the present.”—Minneapolis Star Tribune

“Here's one historian who is a born storyteller.”—Philadelphia Inquirer

“Vowell’s rollicking, sly humor is the perfect spoonful of sugar to down with her intensive research and historical insight.” —Huffington Post

“If you ever wanted an insightful and entertaining look at the friendship between George Washington and his French aristocrat general Marquis de Lafayette, this book by Sarah Vowell…should be on your list." —Kansas City Star

“Vowell's sort of the Quentin Tarantino of popular history: She weaves pop culture and real life into her narrative, breaking down the barriers that keep history buried in the past." —The Milwaukee Journal Sentinel

“Vowell is especially skilled at making detours seem natural and relevant, including in this case a swing by the boyhood home of Bruce Springsteen, which was in the neighborhood of a battle site and, hey, a historical landmark in its own right (plus, she adds, one of the Boss’s relatives was a Revolutionary soldier)… An intoxicating blend of humor and emotional weight.” —The AV Club

“What so funny about American History? A lot, when it's Sarah Vowell telling the story.” —Omnivoriacious

“Lafayette is lucky he has Sarah Vowell in his court.” —New Republic

"With laugh-out-loud humor and her characteristic snark, Vowell makes this walk through history a walk in the park." —The Washington Post

"A whopping canvas as choreographed as a graphic novel…. Vowell brings a learned, wiseacre hand to this work, full of its own brio and dash, and with that legerdemain that finds you embracing history." —B&N Review

“[Vowell] is wonderful at showing the way history can be a conversation between the past and present.”—Sophisticated Dorkiness

"An engaging reminder that America has never been anything but a (somewhat) dysfunctional country." —Washington Monthly

“Sarah Vowell is that hip high-school history teacher everyone wanted to have… She has a gift for the kind of description that seals an image in the reader’s imagination.”—Columbus Dispatch

“When it comes to weird basic facts, all you have to do is turn on a presidential debate to remind yourself of the irreconcilable paradoxes and contemptuous rifts at the highest levels of American public life. [This] is one of those books that reminds us things have been this way since the beginning.”—The Stranger

“Author Sarah Vowell has a unique voice both in reality and in her reality… Vowell takes a rather wry look at history under any circumstance, applying her modern and political perspectives to her topics.”—Gabbing Geek

“Vowell has mined American history for surprising and amusing insights into the heart of the nation.”—Slate

“Like her previous books, Lafayette strikes witty blows against the stodgy sorts of U.S. history taught in classrooms.”—The Smithsonian

"The enjoyment Vowell seems to derive from poking around in America’s obscure corners is part of what makes her historical narratives vital. In tracing history’s circuitous path, she demonstrates how we got where we are today—and sheds light on where we might be heading next.”—BookPage

"[Vowell is] as good at giving facts as she is at making sure you’ll retain them by telling the story in the most fascinating way possible.”—Paste