Suicide of the West: An Essay on the Meaning and Destiny of Liberalism (Paperback) 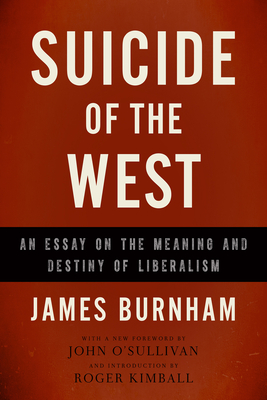 James Burnham's 1964 classic, Suicide of the West, remains a startling account on the nature of the modern era. It offers a profound, in depth analysis of what is happening in the world today by putting into focus the intangible, often vague doctrine of American liberalism. It parallels the loosely defined liberal ideology rampant in American government and institutions, with the flow, ebb, growth, climax and the eventual decline and death of both ancient and modern civilizations. Its author maintains that western suicidal tendencies lie not so much in the lack of resources or military power, but through an erosion of intellectual, moral, and spiritual factors abundant in modern western society and the mainstay of liberal psychology. Devastating in its relentless dissection of the liberal syndrome, this book will lead many liberals to painful self-examination, buttress the thinking conservative's viewpoint, and incite others, no doubt, to infuriation. None can ignore it.

James Burnham has been a noted author, lecturer, editor, and commentator on current affairs. In 1983, Burnham was presented with the Ingersoll Foundation's award for his contributions to the conservative movement, and the Presidential Medal of Freedom. His books include "The Managerial Revolution, The Struggle for the World, The Machiavellians," and many others. Currently retired, Burnham resides in Connecticut.