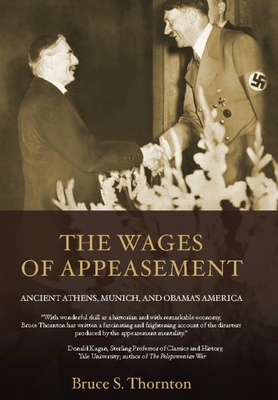 By Bruce S. Thornton
$27.95
UNAVAILABLE-Possible Reasons: Backordered, Out-of-Stock, or Out-of-Print (But email us to search for a copy.)

Wages of Appeasement explores the reasons why a powerful state gives in to aggressors. It tells the story of three historical examples of appeasement: the greek city-states of the fourth century b.c., which lost their freedom to Philip II of Macedon; England in the twenties and thirties, and the failure to stop Germany's aggression that led to World War II; and America's current war against Islamic jihad and the 30-year failure to counter Iran's attacks on the U.S. The inherent weaknesses of democracies and their bad habit of pursuing short-term interests at the expense of long-term security play a role in appeasement. But more important are the bad ideas people indulge, from idealized views of human nature to utopian notions like pacifism or disarmament. But especially important is the notion that diplomatic engagement and international institutions like the u.n. can resolve conflict and deter an aggressor--the delusion currently driving the Obama foreign policy in the middle east. Wages of Appeasement combines narrative history and cultural analysis to show how ideas can have dangerous and deadly consequences.

Bruce S. Thornton is a past national fellow at the Hoover Institution and professor of Classics and Humanities at the California State University. He is the author of eight previous books and numerous essays on western culture and its roots.